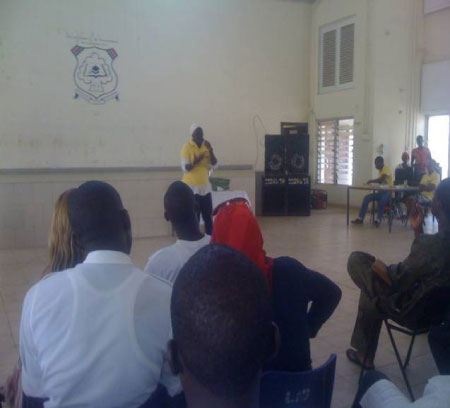 The ambassador’s 2012 sponsored UTG debate championship finalists were announced over the weekend at the end of months of tense debates between various faculties of the of and senior secondary schools within the greater area.

The championship was in two folds: Debate and paper presentation in which the University of the and high schools participated with the aim of assessing students in research, use of English language and public speaking.

Funded by the US Embassy, Banjul and organised by the University of the Gambia Debate Association (UTGDA), the Ambassador’s Debate Tournament aimed at fostering development of the debating culture and skills for Gambian students, engaged students from nine high schools within the Greater Banjul Area and within the UTG in a series of knowledge and skills development programmes necessary for debating.

The 2nd edition of debate showed the school of medicine locking horns with the school of law at the UTG category, while at the senior school category SOS Hermann battled with .

After some tense debate on the Topic: ‘Is it morally acceptable to experiment on non-human animals to develop products and medicines that benefit human beings?’, Nusrat, which went for the motion, were outclassed by SOS Senior School, who were at the opposing side after three panel judges confirmed that SOS had proven beyond doubts to be conferred upon the championship crown. SOS got 75 points out of a total of 100 while Nusrat got 65.

For the UTG category, the two UTG schools debated on the topic: ‘Should foreign aid donor nations and the World Bank continue to give the majority of their aid through direct channel of the Official Development Assistance (ODA), or should they instead give that aid directly to charities, NGOs, PVOs and micro-finance initiatives?’.

The judges described the final as tense and argumentative saying both teams were ‘winners’.

Speaking shortly after the results were declared amid fanfare among supporters of the finalists schools, the Vice Chancellor of the UTG congratulated the winners for a job well done, urging other students to emulate the debaters.

Being impressed with the performance of debaters, Professor Kah announced that the “UTG will waive 50% tuition fee for the two student representatives of SOS that participated in the final provided they meet the requirement for studies at the UTG, while a 25% tuition fee will be waived for the runners-up in senior school category, which went to Nusrat.

For the UTG category, Prof. Kah waved 50% tuition fee for the winners (participants of the of and 25% tuition fee to be waived for runners-up ().

He said the UTG is among the best universities in the world, encouraging students to enroll for studies assuring them of quality and uncompromised education.

VC Kah lauded US Ambassador White for her embassy’s commitment in helping the UTG towards achieving its goal of attaining excellence.

Ambassador Pamela Ann White also joined Prof.Kah in congratulating the winners after months of debate and presentations, saying the embassy is proud to be associated with the debate.

“You students are smart, you all did well. Keep it up,” she told the debaters as well the audience at the conference hall.

The president of the UTG debating association, Kebba Bojang, recalled that since the inception of the association, it has been organizing debates, lectures, and seminars for students and members, adding that the debates create an avenue for students to articulate themselves.

He thanked the embassy for sponsoring the entire tournament and West Coast for giving free air time to the association to debate on issues affecting the society and the world.

Bojang described the UTGDA as a ‘clinic of ideas’, saying every member is intellectually purified to take up “the power of change’ and the UTGDA has reached another level going extra miles.

He urged the UTG to take an active step to help in sustaining the association and the debate winners.

Jimmy Hendry Nzally, Secretary General of the UTGDA, moderated the session. He said: “The UTGDA is an organised group of intellectuals who are interested in demonstrating their skills through public speaking, listening and analyzing situations for reasons, and communicating those imperative ideas to convict and convince his/her audience.”

Certificate and gifts were awarded to all the participants/ debaters as well as individualsand organizations for their support to the association.