Almost all the village chiefs, councillors and village development committees in Upper District have pledged their support to the new president and his government.

The village authorities expressed their renewed support to the government of President Adama Barrow during a meeting at Sittanunku village summoned by Alhaji Eduwarr Fansu-Bandeh Jammeh who was the chief of the district before the reinstatement of the Chaty Cham as the chief.

It was attended by the alkalolou and Imams of all the 52 villages in Upper Niumi, councillors, chairpersons of village development committees, Upper Niumi women’s federation, the Upper Niumi council of elders and North Bank Regional political officer.

The former chief said the meeting was geared towards getting all the district authorities to be unanimous in supporting President Barrow and his government.

Jammeh said the aim of the meeting has been achieved.

“Now all the alkalolou in Upper Nuimi stand behind President Barrow with their all hearts; we are going to be behind him all the time.  What he [President Barrow] wants is what we want,” he said.  “We thank the leadership of the coalition for removing us from Yahya Jammeh’s government.”

He continued:  “On a personal note, I would like to send a special thanks to all the coalition executive members but more especially Sedia Jatta and Halifa Sallah who have been calling on the people to change the government of Yahya Jammeh but it was never possible until now.  So I thank them for their patience.

“I also thank the two women, Fatoumata Tambajang and Isatou Touray.  They were patience to work with men until the change that we all want becomes a reality.

“I also thank OJ [Omar Jallow]; he was part of the PPP [the first ruling party of The Gambia] regime that took us from colonialism but the regime was taken out of power by gun.  With all that OJ never gave up on PPP or relaxed in politics; he was patience until the government is changed again.  He never want the PPP to die; he is a seed for PPP.

“Another great thanks goes to Ousanous Darboe.  He struggled for the country to the extent that he was sent to prison.  In Africa, we have two Nelson Mandela’s; one is in South Africa and the other one in The Gambia and that is Ousainou Darboe.” 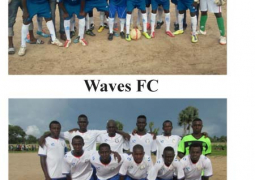