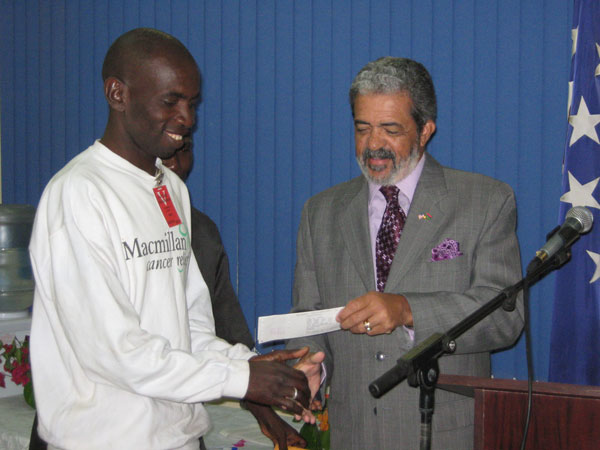 As part of the US Department of State's Ambassadors Self Help Program, the United Sates ambassador to the Gambia, Barry Wells yesterday presented three checks amounting to D423, 745.00 to their beneficiary communities.

Kairaba Avenue
, the chief US diplomat revealed that the money is going to support projects in well construction, garden fencing and materials for the production of wheel chairs.

"I am sure all of you are eager to go back to your respective communities and start implementing your activities; and you will have our full support in doing so".

According to him, the Ambassador's Special Self Help Fund was established in Malawi in 1966, as a way to address urgent development needs at the community level. From the year 2000 until 2007, the U. S. Government has funded 110 self help development projects with a total funding of US$754,100. The purpose of the fund is to invigorate and support members of Gambian communities to invest in the economic growth and development of the country, little by little, said ambassador Wells.

This year he continued, we are supporting a total of seven organizations under the Ambassador's Special Self Help Program to the tune of over one million dalasi. This is the first batch of checks that the embassy received this week and we are expecting more checks totaling over D600, 000.00 for the remaining four organizations.

"It is the US government's objective to help the people of the Gambia develops their communities under this partnership agreement. We have several other development programs that go along with the Ambassador's Special Self Help Program-such as the Democracy in Human Rights Fund, the Ambassador's Girls Scholarship Fund, and the Ambassador's Fund for Cultural Preservation- all aimed at helping the social and economic development of The Gambia," he said.

The beneficiaries include Foundation for disabled people who received the sum of D131, 450 for materials for production of wheel chairs.

Ambassador Wells encouraged the beneficiaries to work diligently on their respective projects, recognizing the great contribution they will make to the social and economic growth of their individual communities

"I am also happy to announce that we disbursed over D500, 000 last month toward the total project cost of 1.5 million dalasi that will be used to finance the construction of an ArabicSchool in Kanjabina in Foni".

The occasion was chaired by Janko Fofana, Programs Coordinator American Embassy. He urged the beneficiaries to make the best use of the money as he will be visiting them during their implementation.

Batch Kandeh, headmaster SinchuGundoLowerBasicSchool, thanked the US embassy on behalf of all the beneficiaries.

Breaking from The Mould