The day's inception in 1989 was endorsed as an opportunity to build better awareness of population issues and their relation to development. This is the 20th World Population Day, the 40th Anniversary of UNFPA and also the 15th anniversary of the historic International Conference on Population and Development (ICPD) that guides our work at UNFPA.

Since 1990, governments and their national partners have been marking World Population Day with a variety of activities and events focusing on the importance of population to overall development strategies.

UNFPA will joint the Office of the Vice President, Government counterparts, NGOS , UN agencies and Civil society to commemorate World Population Day with a variety of activities at BAFROW, Mandinaba and Farafenni in the North Bank Region from July 11th 14th 2009.

The 2009 World Population Day theme is "Responding to the Economic Crisis: Investing in women is a smart Choice".

Investing in women and girls during the global financial crisis will help set the stage for economic recovery and reduce inequality and poverty, according to Thoraya Ahmed Obaid, Executive Director of UNFPA, the United Nations Population Fund. "There is no smarter investment in troubled times," added Ms. Obaid in her statement for World Population Day, which falls on Saturday, 11th July.

Women and girls were the majority of the world's poor, even before the current financial crisis, said Ms. Obaid. "Now, they are falling deeper into poverty and face increased health risks, especially if they are pregnant." For World Population Day, she added, "I call on all leaders to make the health and rights of women a political and development priority."

In developing countries, women's health has critical economic importance. Women are more than half the agricultural labour force. They grow 80 per cent of staple crops in Africa, and in , 90 per cent of rice growers are women.

Investing in reproductive health is especially cost-effective, noted MS. Obaid, adding, as an example, "an investment in contraceptive services can be recouped four times over - and sometimes dramatically more over the long term - by reducing the need for public spending on health, education and other social services."

"Together," added Mr. Ban, "let us advance the rights of women and girls, and empower them as highly productive members of society capable of contributing to economic recovery and growth. There can be no better investment on this day or any other." 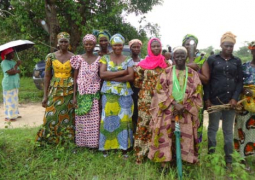