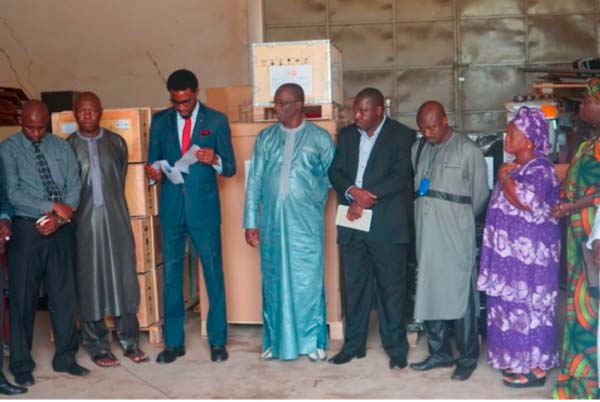 The UNFPA Gambia Head of Office, Kunle Adeniyi, yesterday 25 October 2016 handed over to the Hon. Minister of Health and Social Welfare, Omar Sey, equipment and supplies worth US$1.6 million (equivalent of D72.09 million).

In a brief ceremony held at the Ministry of Health warehouse in Kotu, Mr Adeniyi indicated that the UNFPA/Gambia Government partnership dates far back as 44 years ago and, during this period, UNFPA’s continued support and the government’s dedication and commitment have seen a significant reduction of maternal mortality from 730 for every 100,000 live births in 2001 to 430 deaths for every 100,000 live births in 2013.

The UNFPA official added that the situation is not perfect, which was why UNFPA would continue to partner with the government to improve health service delivery in The Gambia.

The donation was a manifestation of that commitment, he continued.

“UNFPA is the sole provider of contraceptives and maternal lifesaving drugs in The Gambia, as in many other countries, and that partnership with government will continue to ensure that every child born has a mother to guide his or her growth and development.”

In receiving the donation, the Minister of Health and Social Welfare, Omar Sey, said The Gambia is the only country in the sub-region and beyond that provides free maternal and child health services.

“Mothers in The Gambia do not pay for antenatal services from conception to delivery,” Minister Sey said, adding that the government could not do it alone, which is why good partners like UNFPA play a significant role.

The Health Minister further indicated that the issue of maternal and child health is dear to the heart of the President and the First family, so UNFPA is directly complementing the efforts of the President.

He said the donation received came at the right time to support the government’s initiative to provide accessible and quality health services to the population.

In giving the vote of thanks, the Director of Social Welfare, Fanta Bai Secka, assured UNFPA that the materials donated are timely and would be distributed immediately to the facilities that are in need of them.

She called for continuous partnership and collaboration between UNFPA and the Ministry of Health and Social Welfare to ensure that maternal health services are enhanced in The Gambia for the benefit of mothers and children.

The materials donated included maternal lifesaving drugs such as oxytocin, misoprostol, magnesium sulphate, egometrine, among others.