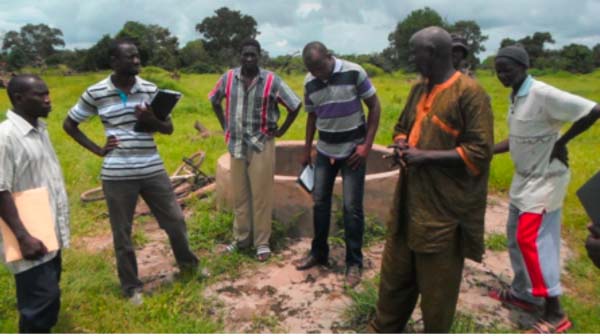 The alternative livelihood component of the UNDP/GEF Coastal Resilience project is striving to ease climate stress in affected local coastal communities whose farmlands and rice fields are affected by the phenomenon of climate change.

A team of experts from different stakeholder institutions visited the 15 proposed intervention sites that are to benefit from the alternative livelihood component of the project.

These Gambian local experts were drawn from the departments of forestry, fisheries, community development and agriculture with the aim of collecting firsthand information from the beneficiaries.

They were also given the necessary technical advice in their different areas of intervention.

They as well looked at the viability of the project to consider the possible social and environmental problems that may surface during the implementation of the project and have extensive salt intrusion problems into their production fields.

The five climate-resilient alternative income-generating livelihood activities identified for the 15 communities will be tried for a period of one year.

The ultimate objective of the trial is to determine the feasibility of replicating the activities to a wider number of communities with similar problems.

According to Malick Gaye, the M&E officer for the project, the five Livelihood Options the communities did choose are salt production, horticulture, honey production, fish processing and livestock management.

Mustapha Camara of the department of agriculture said the project would complement the already available potentials government has provided in securing the Millennium Development Goals (MDGs) and the 2016 target for The Gambia to attain food self-sufficiency.

He said works on all the sites were impressive and the project would therefore boost their morals.

Babanding Sanyang, a representative from the forestry department, said the tour was a resounding success since they held series of fruitful discussions with local beneficiaries.

He said they gave their candid and professional advice to them in an effort to plant trees in and along the horticultural garden.

If all works well, Sanyang said, the project would improve the livelihood of the communities thus boost their local economies.

Mama Janneh of the department of community development buttressed the need to train or retrain Village Development Committee (VDC) members being the first point of call to any village.

She said the unsustainable or failures of most projects partly depend on the inadequate capacity of VDC members, and she therefore calls for vigorous training for this local institution as a product of an act of parliament.

Saloum Jatta, a representative from the department of fisheries, called on Gambians to explore and develop aquaculture.  The introduction of aquaculture as an alternative livelihood component by the project, he said, would go a long way in addressing not only the protein needs of our local communities but would equally boost the economic status too.

He called for replication of such project into other parts of the country.

Alkalo Bakary Marong of India village in the Upper Badibou district of NBR expressed gratitude to the UNDP/GET Coastal Resilience Project for coming to their aid at the right time.

He called on the beneficiaries to make maximum use of the project by jealously guarding it for sustainability.