As the world gears up for this year's Human Rights Day celebrations on 10th December, the Secretary General of the United Nations Ban Ki Moon has issued a message, calling on all to be inspired by those seeking to make our world more just.

According to the UN boss, when the voices of human rights advocates are silenced, justice itself is drowned out.

"When the lives of human rights advocates are endangered, we are all less secure," he added.

The United Nations Secretary General stated that the day is an occasion to salute the courage and achievements of human rights defenders everywhere – and to pledge to do more to safeguard their work.

"States bear the primary responsibility to protect human rights advocates. I call on all states to ensure the freedom of expression and the freedom of assembly that make their work possible," he added.

Human rights defenders, the UN boss went on, play a vital role in the fight against discrimination.

"They investigate violations and help victims gain justice and support. Far too often, their work entails tremendous risk," he noted.

He further stated that defenders are harassed, stripped of their jobs and wrongfully imprisoned.

"In many countries, they are tortured, beaten and murdered. Their friends and family members are also subjected to harassment and intimidation," he said, adding that women human rights defenders face additional risks and, therefore, need additional support.

"Defenders are a diverse group. They might be part of a civil society organization, a journalist or even a lone citizen, spurred to action by abuses close to home. But they all share a commitment to expose wrongdoing, protect the most vulnerable and end impunity. They stand up, speak out in the name of freedom and human dignity," the UN boss stated.

He noted further that laws to protect and promote human rights are indispensable but quite often, progress comes down to people… courageous women and men… striving to protect their own rights and the rights of others… determined to make rights real in people's lives.

He also noted that human rights are the foundation of freedom, peace, development and justice -- and at the heart of the work of the United Nations around the world. 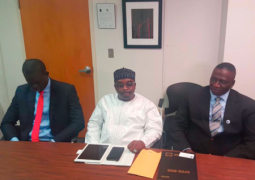