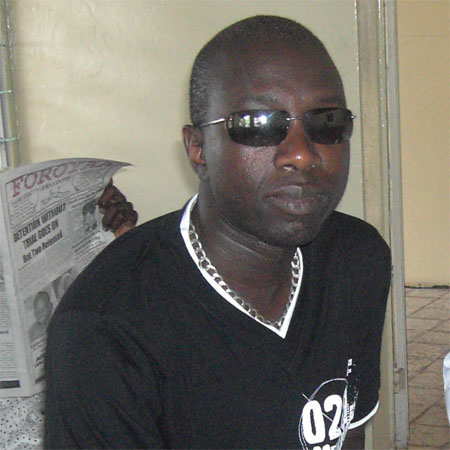 One Step is a ten-track album produced in the sometime in August of last year and Omsla had been here to promote the album in The Gambia through a mass media campaign.

Speaking to The Point in an exclusive interview at our

#2 Garba Jahumpa Road
offices, the UK-based artist explained that he would return to the this Friday after two weeks of promotional campaign in The Gambia.

According to him, the level of the popularity of the album in the is 'quite high,' adding that it is selling well.

"The album is quite popular not only among Gambians but even non-Gambians. People appreciate it because it is like an African doing Reggae. It is on the shelves of many record labels in The UK and I have already concluded arrangements with Kerewan Sounds to serve as a source of distribution for the album. Legal Sounds in Serekunda are also willing to distribute the album," disclosed Omslo with delight.

It will be recalled that Omslo was here in The Gambia to promote his album in the first ever talent awards held in the country last March. He has also joined forces with the famous Gambian kora maestro Jaliba Kuyateh in a campaign against malaria in the and during the period the duo recorded a single entitled "Don't Give Up." This single is now featured on the new album. Meanwhile, the new album can be procured on-line by visiting www.omslabaru.com.

Husband in Court for Threatening to Kill Wife