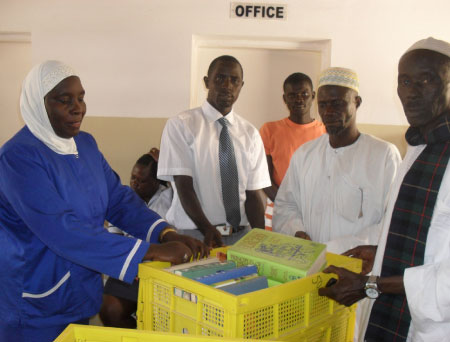 Junkung Jammeh, a Gambian residing in the , last Monday presented medical items to the in Kanifing.

Junkung, who also works with in the , said the donation forms part of his contribution to the country’s health sector.

Speaking at the presentation ceremony, the principal nursing officer at the hospital, Saffie Njie, says health is everybody’s business.

The government alone cannot do it all, he says, noting that health financing is very expensive.

He thanked Mr Jammeh for his support to the hospital, saying: “The donated medical items will be put into good use.”

Lang T.F. Jammeh, a brother to the donor, who said that was the first time his brother was donated such items to the Serekunda hospital, noted that for the past years he had been donating such items to the various health centers within the country.

It has always been his brothers’ wish to see how he could help the country’s health sector, he explained, pointing out that Serekunda hospital has a large catchment area “that is why this time around Mr Jammeh decided to support the hospital. He urged other Gambians in the diaspora to emulate the gesture of Mr Jammeh.

For his part, Junkung Jammeh said he would continue to support the Gambian health sector.

He acknowledged support given to him by the deputy permanent secretary for Technical at the Ministry of Health and Social Welfare, Omar Sey, through which was able to assist The Gambia with medical items.

The ceremony was chaired by the public relations officer of , Alieu Jarjue.