Njogu Demba, Ousman Jallow and Paul Jatta from the Danishtop-flight league and Amadou Jawo of the Swedish Allsvenskan are set to take on their opponents in the return leg of theUEFA Europa League tonight after making an impressive first leg win with their respective clubs last week.

Njogu Demba and Odense BK will be heading south to meet Bosnian Zrinjski after outclassing them 5-3 last week at home.

The Supeliga side after suffering from a 1-0 defeat to local side Horsens on Monday is expected to defeat their two goals advantage in Bosnia.

Ousman Jallow and Paul Jatta's Brondby who enjoyed a 2-1 away win to Buducnos in the first leg will host their opponents as part of the 3rd round qualifiers.

Another Gambian international who has every success to cerebrate with club side is Amadou Jawo.

Jawo and his Swedish side Elfsborg beat UEFA Europa League opponents Teteks 5-0 in the first leg.Elfsborg will travel to Macedonia with heads high as opponents will find it absolutely impossible to overturn the goal deficit at the Nacionalna Arena. 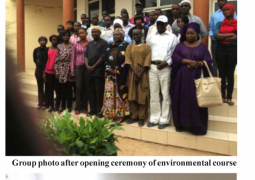 Let’s say ‘No!’ to teenage pregnancy