Four persons including the National Treasurer of the opposition United Democratic Party, UDP, have been arrested and are currently in custody at the headquarters of the National Intelligence Agency in Banjul over what the NIA described as a failed attempt to help a young man seek political asylum in Finland.

Amadou Sanneh, former Accountant General, who is the National Treasurer of the UDP, Bakary Baldeh, a commissioner of oaths, and one Alagie Sambou Fatty were arrested by the NIA based on the allegation that they wrote an attestation for one Malang Fatty, also arrested, using a UDP letterhead in order for him to seek asylum in Finland.

At a briefing held at the NIA headquarters yesterday, intelligence officers showed journalists a document said to be an attestation purportedly written on a UDP letterhead and signed by Amadou Sanneh and stamped by Bakary Baldeh, commissioner of oaths, for Malang Fatty to seek political asylum.

In the attestation, a copy of which was made available to The Point, Amadou Sanneh among others stated that: ‘‘Since the United Democratic Party poses as the main challenge to the current pro-military dictatorship and its members are being prosecuted on a daily basis, active members of the party who happens to be out of the country are advised to be very cautious and seek asylum as and when necessary.’’

‘‘Mr Malang Fatty has been receiving and coming across many threats to his life thus the necessity for him to be on the run and seek refuge from certain persecution by the State agents.

‘‘Mr Fatty had been arrested and put under police custody before for political activities and his return to The Gambia will seriously endanger his life. It is for these reasons that I write to you to help in anyway possible and assist Mr. Fatty from being put in any serious danger,’’ the attestation further stated.

‘‘Mr Fatty is a political refugee by all definition and standard, and should therefore be granted the status and protection as provided for under all International Human Rights Conventions.

‘‘In the name of human rights, the party would be grateful if all assistance is provided for him so that he can continue to promote democracy and respect for human rights in the Gambia even though he is away,’’ the attestation added.

Speaking at the press briefing, a senior NIA officer, who heads the investigation panel on the case, told journalists that on the 19th of September 2013, one Malang Fatty a native of Bantanto village in the Central River Region and presently residing in Latrikunda Sabiji was arrested at Amdallai border post by state security agents, and during a search they found the attestation document written by one Amadou Sanneh, the UDP national treasurer and executive member of the party.

According to him, the elder brother of the suspect, Alagie Sambou Fatty, accepted that he contacted Amadou Sanneh at the UDP political bureau in Banjul for the said attestation.

‘‘Furthermore, prime suspect Malang Fatty has admitted to the investigators that he was never at any time detained by any sister security, and that his life was never in danger as stated in the UDP attestation,’’ the NIA officer said.

He also said that one Bakary Baldeh, a commissioner of oaths, “without due care and consideration to his office, flouted procedures and conspired with Fatty to append his stamp on the attestation”.

The intelligence agency, he added, has “established that quiet a number of disgruntled and unpatriotic elements, who due to certain official malpractices, acquired the same attestation from the UDP and were granted political asylum in Europe and America all based on fabrications against The Gambia and its leadership.

When asked to comment on the allegations, all the suspects except Malang Fatty declined to make any comment. They said they would only talk in the presence of a lawyer.

However, the prime suspect Malang Fatty denied being ever arrested or detained by state agents. 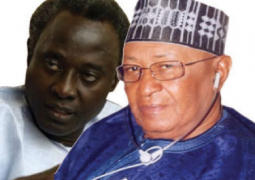