UDP leader Ousainou Darboe and members of the party executive Sunday called a press conference to announce that the police denied the country’s leading opposition party a permit to hold a political rally at Cedar Club Latrikunda German.

The rally was to celebrate UDP’s 18th anniversary, following the launching of the opposition party in The Gambia on 23 August 1996.

23 August 1996, said Lawyer Darboe, is “a very significant day in the life of the United Democratic Party; in the life of modern-day Gambia. It is a day on which Gambians who cared for their country got together to put up resistance to impunity; unlawful behavior of the military; to protest against the overthrow of the democratically elected government; and, it was a day when Gambians were given renewed hope that their children and grand children will live in a decent society. The rally was to be held to celebrate and salute those Gambians who have dedicated their lives to the struggle for political pluralism.”

The UDP, lawyer Darboe wants the public to know, is being frustrated in its attempts to hold a political rally, and that it would not allow the opposition party’s political rights to be denied.

Speaking to reporters, Lawyer Darboe said 2016 is a crucial year in the country, a year in which elections will be held. That the UDP, as a political party, has started working towards 2016.

He said the party had planned a rally for the 9th of August, and the application for use of a public address system at the rally was submitted to the police on 19th July 2014. However, the police asked the UDP youth wing leader Ebrima Sandeng to pick up their letter on 7th of August.

The UDP executive then decided that the period between 7 and 9 August was not enough time to publicise and hold the rally, which was to be held at Ebony Junction in Serrekunda Central.

The UDP submitted another application letter dated 11th August “to celebrate the 18th anniversary of the founding of the United Democratic Party” on 23 August 2014 at the same venue.

“Our application was not rejected,” Darboe said, but the police asked that the rally be held at “a different venue.” He added that the police not only responded just a few days before the event; but then stated in their letter – copy of which was made available to reporters at the press conference - that “due to the rainy season and the conditions of the roads linking to the main road, the diversion of the traffic will cause difficulties to motorists and pedestrians, if the rally is held at Ebony, Serrekunda Central.”

When this reason was given by the police, the UDP leader wrote to the Inspector General of Police, according to a letter dated 21st August – a copy of which was made available to the reporters – and complained about the police “handling of our applications for use of Public Address System at our rallies.” He said he pointed out that the police have not been responding in good time to make it possible to organize these rallies.

“In any event, the UDP and other parties have held rallies at this particular venue in past rainy seasons, and the conditions of the roads linking to the main road have not changed. Pedestrians and mororists never experienced any difficulty…”

Lawyer Darboe described the reason given by the police as not acceptable, that it was not a “genuine” explanation, adding that the police showed a lack of “good faith”, when they delivered their reply at around 5 pm on 20th August – to the UDP’s application to hold their rally on 23 August.

He further described the police’s reaction as “a ploy to stop us organizing the rally”, and that the UDP wrote back to them that the party will now hold the rally at Cedar Club Latrikunda German on 30 August.

Then on Thursday 28th August, again at around 5:30 PM, according to the opposition leader, the UDP received a letter from the IGP stating: “Please be informed that your request is not granted due to security reasons.”

The UDP called the reason given by the police “a sham” and wondered what security reasons will require opposition political parties not to hold rallies in the country.

The UDP is not an organ that would jeopardize the country’s security. The opposition party has been at the forefront of ensuring that peace and stability in The Gambia is not put in jeopardy, he went on.

According to lawyer Darboe, if anybody poses a security threat, it has been APRC supporters who have been charged with treason.

Darboe went on to declare that as regards the denial of a permit to hold the rally planned, the UDP holds deputy IGP Ousman Gibba responsible.

Asked how this development reflects on the national count down to the 2016 elections, Darboe said it shows the continuing stifling of the political opposition; that it manifests a poor democratic environment in which political parties are not allowed to operate freely.

He said considering that the opposition parties do not have access to the public media, to deny them permits to hold political rallies is tantamount to an attempt to “undermine the constitution, and to sow seeds of discontent in the country.” 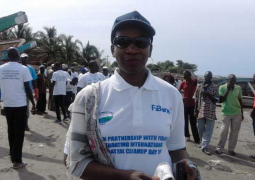