The members of the Federation of Gambia Muslim Students Organization (FEGAMSO) last Saturday embarked on a massive cleansing exercise at the new building and at the entrance of the Supreme Islamic Council Headquarters in Kanifing.

FEGAMSO is the umbrella body of all school based Islamic clubs and societies in the country.

Addressing members in a joyous mood at the end of the exercise Brother Muslapha Barry, President of GEGAMSO, thanked the members for the large turn out and active participation in the exercise. He stressed that the exercise is in line with their faith. He added the importance of cleanliness cannot be over emphasised.

"We have been doing this over the years usually at public places such as mosques and hospitals and we are pleased to be here today," he said. Mr. Barry used the opportunity to remind those gathered about the forthcoming FEGAMSO annual inter school Islamic competition slated for . He urged them to prepare well for the event and to also pay their contributions for a successful event.

For his part, the former president of the Muslim student's body Mr. Jorbateh Fofana called on Muslim students to rededicate them selves to the service of FEGAMSO.

A Man of Courage 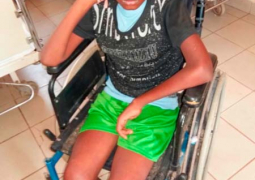