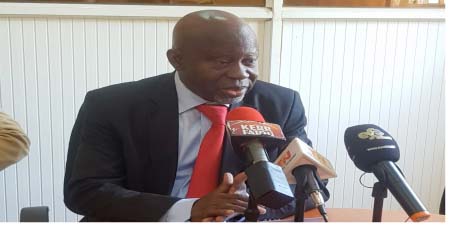 The secretary general and leader of the United Democratic Party, Lawyer Ousainou Darboe has expressed his party’s resolve to work with the government of The Gambia in a bid to combat the spread of coronavirus (covid-19).

Lawyer Darboe was speaking during a press confab on Tuesday, as the party joins the rest of the world to express concern about the deadly virus, which is spreading fast around the globe.

The UDP he said, will continue to give its full backing and participate in any awareness campaign that the government may embark on.

It could be recalled that the outbreak of the covid-19 has hit global economies, which appears headed for uncharted but troubled territory.

Last week, the World Health Organisation declared the outbreak as a global pandemic. To this end, the veteran lawyer and leader of the UDP, advised the government to act fast, be proactive, decisive and put in place forward thinking strategies to deal with the global menace.

“Although, there have been no reported cases of the virus in The Gambia, but we are aware that there are several cases reported in Senegal that has warranted strict public health measures such as the closing of schools for the next three weeks in Senegal,” he said.

He thus on behalf of the UDP party urged government to convene a meeting of stakeholders and setup a national emergency response team, which will comprise relevant government departments, local government authorities and non-governmental organisation (NGO) public health partners in the country to assess the country’s health infrastructures’ level of preparedness to address any potential outbreak.

“The government should engage partners to assess the health infrastructures’ level of preparedness to address any potential outbreak such as testing and screening capacity availability of proactive medical supplies for frontline healthcare providers’ measures and mitigate the spread of false information about the virus by ensuring availability of water and hand washing station at public places,” he urged.

Due to the outbreak of the deadly virus, Lawyer Darboe declared that they (UDP) have cancelled all their political activities which will encourage large gatherings.

“The UDP party through our National Assembly Members, Mayors and Chairmen of local government authorities, is ready to and will stand by and support the government with any interventions and measures to deal with the pandemic and alleviate its economic consequences,” he said.

In order to manifest one of their support to government, Darboe stated that he has personally made arrangements for the installation of 16 hand washing stations in the Greater Banjul area by members of the Youth Wing of the party.

This, he said, is to promote the World Health Organisation’s popular “Safe-hands Challenge”.

Meanwhile, the party also promised to organise a quarterly briefing on contemporary affairs and its activity.