Lasanna Jobarteh, a militant of the United Democratic Party (UDP), charged with broadcasting without a licence, Monday opened his defence before Principal Magistrate Ibrahim Kijera of the Bundung Magistrates’ Court.

The accused, Lasanna Jobarteh, in his defence, told the court he lives at Latrikunda Sabiji, a retired civil servant in 2002, and worked for the department of information and broadcasting for 20 years.

He did not own, operate or manage any broadcasting institution.

The accused further told the court he belongs to a political party called the United Democratic Party, but he was not an executive member of the party, although executive members would assign him responsibility now and again.

“I know a facility called Viber is a telephone facility used for communication by people at a distance and the rate is free,” he said.

“I know you must have an internet facility before you can access Viber. I know of Skype, which is also a telephone facility mostly on Smart Phone. I know of a laptop which can also be used for Skype,” he told the court, adding that Skype is not a medium for broadcasting.

“On 14 and 15 December 2013, I attended political rallies of UDP both in Buffer Zone and at Brikama, but before going to the rally, the party leader assigned me duties to help organize the rally, and record the speeches and images for the benefit of the party and its supporters, so that those in the diaspora can benefit by calling me,” he stated.

The equipment they used to see image was laptop and listening to radio, denying that he never broadcast at any radio station, and he did not speak at those rallies, adding that he did not know freedom radio was connected to Skype account he was using.

“When I noticed that Freedom was connected, I disconnected the Skype, and prior to the tendering of the exhibit B, it was printed and shown to me at the NIA, while I was under the custody of the NIA. I did not accept that I broadcast the rallies on Freedom Radio, and I did not need a licence to communicate on Skype,” he added. 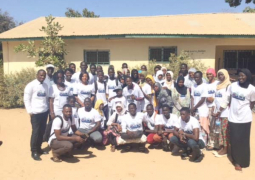