When the charges were read to the accused in a congested and chock-full courtroom, the defence objected to all the five counts.

The leading defence counsel Antuman Gaye, stood up to made series of objections regarding the taking of pleas by the accused persons, except for Sam Sarr who is representing himself.

Defence counsel Antuman Gaye made the objections upon court's reading of the first count for the accused persons to take their pleas. He argued that the defence team was submitting a preliminary objection to all the charges preferred against their clients.

This pronouncement prompted the Director of Public Prosecution, Richard N Chenge to object to the defence's submission. Submitting further, he said, in the last proceeding the matter was adjourned for the accused to enter their plea.

But the defence counsel, led by senior counsel Antuman Gaye responded that the last court's session was over taken by events and subsequently cited Section 161 (A) of the Criminal Procedure Code "that the right time of making objections in court concerning the charge is at plea taking," arguing further that it was the right time.

Submitting further, with regards to count 1, 2 and 3, the counsel submitted that neither the accused nor their counsel were served with any notice by the Attorney-General, even as her consent of withdrawing those charges from the subsidiary courts.

Still buttressing defects in the process of serving the defence counsel, senior counsel Gaye, therefore quoted Section 53 subsection (3) of the Criminal Procedure Code that "any person cannot be prosecuted without the consent of the Attorney-General, and thus he submitted that there is no amendment to this section," counsel Gaye submitted.

In line with count 4 and 5, "I submitted in respect to count four and five are equally defects" he submitted.

Defence counsel further pointed out defects in the offences brought in count 4 and 5, arguing that criminal defamation as in section 174 have been amended. He submitted that any person charged with printing and publishing or otherwise should not be charged with defamation, but libel and henceforth count 4 and 5, is defected by Section 34.

While submitting still on count 4 and 5, in line with conspiracy and criminal defamation, according to the lead counsel Gaye, are mutual charges and the law requires the specific criminal defamatory words and the particular web site.

He further submitted that there is a substantive offence that is against the modern trend in criminal offences, which he referred to as oppression on the charges.

Leading Counsel Gaye quoted several authorities, including the law report of Ghana in line with count 2 that publishing with seditious intentions is duplicitous and to that effect is carrying several charges that the accused persons must know precisely of what brought them to court.

He further drew the attention of the court to the Amendment Act of 2005, which imposes a minimum penalty of D50, 000 and a maximum penalty of D250, 000 or both a fine and imprisonment of six months.

Regarding his position on count 2 and 3, he said, the particulars of offences disclosed an offence not known in law.

The Director of Public Prosecution Richard N Chenge applied for short adjournment to reply to the preliminary objections raised by the defence.

The court attempted to serve the defence with the fiat in court, but defence counsel refused on the ground that accepting it would be counter productive to their objections.

The presiding Justice Wowo said "this court is here to do justice to both sides." In reaction, defence counsel Antuman Gaye retorted "well this is what we expect."

The case was adjourned to tomorrow Friday 10th July 2009, for DPP to reply to the preliminary objections raised by the defence. 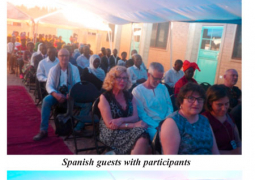