"I want to resign from my post as constituency chairman of the United Democratic Party (UDP) with immediate effect," Mr. Darboe told this reporter.

According to the UDP strongman, he is resigning because of old age, coupled with his poor health condition.

"I am resigning because I am getting old, and my health condition is not supporting me in serving my duties as chairman of a constituency, and leading the people to make sure that the party survives and remains strong".

"As a leader, you must be upright and honest enough to your people. You should not accept a responsibility when you know you are not in position to carry out your responsibilities," he stated.

Quizzed as to whether his resignation will not affect his allegiance to the party, and its growth in the area, the UDP bigwig responded: "No! No! No! I am still UDP and those who are UDP are still UDP. Before I took the position somebody was there and so after me somebody will take over. My only problem is that I am ageing and that my health is not supporting me."

It would be recalled that Mr. Darboe took the position as UDP constituency chairman after succeeding the late Borry Darboe, who later crossed-carpeted to the ruling APRC. 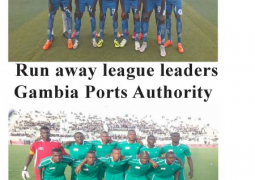