The ’s Darling Scorpions have secured vital points at the expense of Ojoko FC of in the ongoing international youth football championship in .

The team’s trio goalkeeper Musa Camara and midfielders Mamut Saine and Lamin Sarjo Samateh each scored one to give the national U-20 team all the vital points needed to make a smooth headway in the tournament.

Musa Camara, who plies his trade with the telecommunication boys Gamtel in the country’s top flight football, put the Gambian side ahead when he converted from a penalty spot to give the Darling Scorpions a hope of victory on the stroke of half time.

The Gambian team under the guidance of coach Lamin Sarr put up a fantastic performance throughout the first period. This paid off well upon resumption thanks to Lamin Sarjo Samateh’s doubler, with midfield kingpin Mamut Saine adding another to complete a decisive 3-2 victory.

The U-20 team, according to Lamin Sarr who has led the team to its second African U-20 championship to be hosted by Libya next March, is using the Sierra Leone tournament to better prepare for the upcoming African U-20 youth championship in Libya.

The eight-team tournament is organised by Johansen, a national of the , and his Sierra Leonean wife Isha.

The Darling Scorpions, who were the bronze medalists in Congo Brazzaville in 2007, it would be recalled, became the champions of a similar championship in last year.

The team snatched all the important accolades in that competition including the tournament’s most valuable player award, the leading goal-scorer.

They are on the brink of achieving similar results if their spectacular start in the eight-team championship is anything to lean on.

The team was locking horns with the national U20 team at the time of going to the press yesterday. 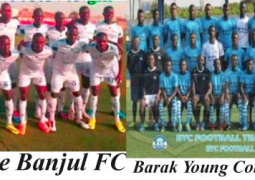