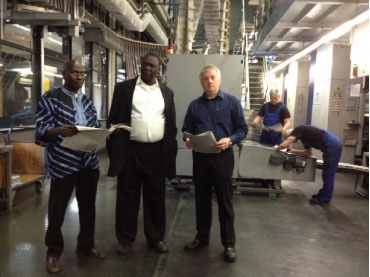 Two veteran Gambian journalists over the weekend returned home from a week-long visit to Germany.

Pap Saine, co-publisher and Managing Director of The Point newspaper and Sam Sarr, Editor of Foroyaa newspaper were in Germany, from 10 to 15 February at the invitation of the Goethe Institute, the Federal Republic of Germany’s cultural institution, which operates worldwide.

The visit, which took them to various institutions and organizations of relevance to the media landscape in Germany, was among others intended to give the visitors first-hand information about life in Germany, particularly its media system.

During their stay in Germany, the two media chiefs visited a wide range of media outlets, foundations and printing press in Berlin and Hamburg.

Mrs Eva told the visitors that the association sees itself as a trade union and a professional organization, noting that due to the economic crisis, production of newspapers has declined leading to retrenchment of 1200 journalists.

Saine and Sarr also visited the offices of the German Section of RSF and met Jens Uwe Thomas and Christophe Dreyer. The two personnel of RSF explained their work in promoting freedom of the press and expression in Germany, sensitizing the German public on press freedom around the world and assistance they have offered to journalists in Eastern Europe.

The visit also took the two media chiefs to Die Tageszeitung, a Berlin-based daily newspaper which has a circulation of 60, 000. It is a cooperative owned independent newspaper for critical reporting and social commitment.

They also had a round-table discussion with professors Doctor Susanne Gehrman and Ms Usha Adjamah, project coordinator, during which discussions centered on the media constraints such as training, equipment, high cost of printing materials, among others in The Gambia.

The office operates on the premise that the government should be held accountable and must be properly informed.

The visit also availed the two media chiefs the opportunity to visit the Federal Press Conference, an independent association of full-time journalists founded by parliamentary correspondents in 1949.

The Federal Press Conference convenes press conferences every Monday, Wednesday and Friday, attended by the 12 spokespersons of the government and the ministries.

The two media chiefs on Wednesday 13th February witnessed one of the press conferences, during which the spokespersons answered questions from journalists.

They were also fortunate to visit Hamburg Der Spiegel, a local weekly with a circulation of one million.

At Hamburg Der Spiegel, Saine and Sarr met Ms Britta Standberly, senior foreign editor and Jan Puhl, foreign editor Africa department, who explained to their guests that the magazine is Europe’s largest, with a circulation of 900, 000 currently.

According to him, some of the constraints include the decline from one million to 900, 000 due to online papers. He added that apart from the magazine, they also have daily online which three hundred and ninety million people browse every month.

The visit also took the two media chiefs to Hamburger Abendbiatt, a daily newspaper with a circulation of 230, 000.

On Friday, the last day of their visit, Saine and Sarr visited a printing plant, BV2 Berliner Zeitungsdruck GmbH, which prints two main local newspapers together with 50 dailies, weeklies, monthlies, and quarterlies.

The printing plant has modern facilities and one of the newspapers that it prints has a circulation of 1.3 million, which boasts of printing 300 million copies annually.

Charged British Couple to Make up Their Minds