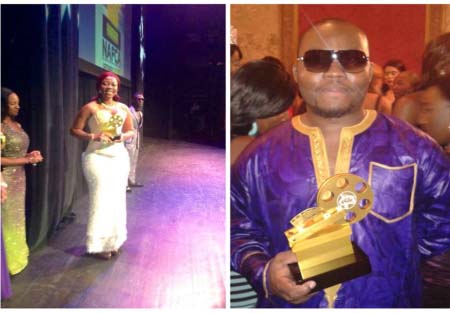 Nollywood star Fatima Jabbe was voted best female actress at the African Oscars in Washington District of Colombia topping the list of 32 nominees in Africa People’s Choice Best Actress category, according to reports.

At the prestigious dinner held at the Warner Theatre in Washington, Ms Jabbe picked the award ahead of other Nollywood superstars including the likes of Omotola Jalade, Monalisa Chinda, Queen Amina and Ify Hollywood.

London-based Ms Jabbe has featured in numerous Nollywood films shot in the UK and was one of the stars of the recently-shown Shameful Deceit.

She has starred in popular Nollywood movies such as ‘Mirror Boy’, a movie that has raked in millions of Nairas. She is also featured in Battered.

In the film, former Super Eagles striker John Utaka will be making his Nollywood debut and several other Nigerian regulars including Theodora Ibekwe, who was voted the best UK-based actress at the Nigerian UK-Based Achiever’s Award, and veteran Lanre Balogun will appear in the movie.

Ms Jabbe said: “This film promises to make you cry, laugh and smile. Watch out for Battered, a movie that will keep your eyes on the screen without blinking.”

She said the film will be a game changer in the UK Nollywood cinema, adding that Battered is a film highlighting violence against women as an obstacle to the achievement of equality, development and peace.

Ms Jabbe, who is the script writer and executive producer of this emotional film, plays the leading role of Ann, who is a victim of crucial social mechanisms by which women are forced into a subordinate position compared with men.