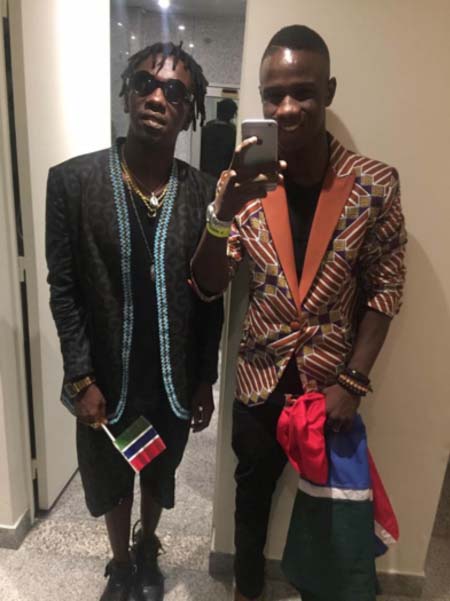 Two Gambian artists have attended the All Africa Music Awards, (AFRIMA) on 6 November, 2016   in Nigeria Lagos.

It was done via public voting for the nominees in the different categories of the awards opens. However the two could not win any awards in the categories they are nominated.

The Lagos State Governor, Mr. Akinwumi Ambode, on Sunday November 6, at the Eko Hotel and Suites, played host to over 5,000 guests and 2100 international delegates at the third annual All Africa Music Awards, AFRIMA which was broadcast live to countries around the world.

The event witnessed an array of officials of the African Union and African music superstars; AFRIMA past winners; 2016 nominees; top government functionaries; members of the diplomatic corps, corporate Africa, stakeholders in the creative/ entertainment industry in Africa, media executives, and music artistes.

Meanwhile, an art-loving Ambode had on Saturday November 5, hosted foreign delegates and nominees of AFRIMA, ambassadors and the Deputy Minister of Tourism and Hospitality Industry, Zimbabwe, Honorable Anastarcia Ndulovu, to a dinner at the State House, Ikeja.

Also present were artistes, AFRIMA nominees and a host of other media executives.

While welcoming his guests at the Governor’s Lodge, Ambode reiterated Lagos State’s vision of making the city an undeniable entertainment capital of Africa, as well as being the hub of creative expressions in the continent.  This, he opined, will open up the economic-viable state for more foreign and local investors.

The governor, who was accompanied to the November 6, AFRIMA 2016 awards ceremony by his wife, (Mrs.) Bolanle Ambode; the state’s Deputy Governor, Dr. Mrs. Oluranti Adebule, and hundreds of government officials including commissioners, has successfully placed Lagos as the first state in the country and on the continent to officially host thousands of Africa’s stars in the city.

However, having considered which state has the most motivation to host AFRIMA in line with its values; which has the strongest vision in tourism, culture and entertainment, the AU announced Lagos as the Host City for AFRIMA 2016 on August 15, 2016.