The US Charge d’Affaires in Banjul, Joseph D. Stafford, and the ambassador of Nigeria, Esther John Audu, who was dean of the diplomatic and consular corps, have ended their tenure in The Gambia.

To mark their departure, the ambassador of Turkey, Ergin Soner, last Friday organised a buffer dinner to bid farewell to the two diplomats, as a gesture of recognition of their diplomatic service over the period.

The farewell dinner, held at the Turkish ambassador’s residence at Brufut Gardens, was attended by ambassadors of other countries such as France, Germany, Sierra Leone and Venezuela, as well as country representatives.

Delivering his farewell message, Ambassador Soner expressed pleasure about working with both ambassadors, Stafford and Audu, and acknowledged their invaluable contribution to cooperation within diplomatic circles in the country.

He also applauded them for having accomplished their missions in The Gambia, with high standards of professionalism.

He praised Ambassador Audu for her invaluable services as the dean of the diplomatic and consular corps in The Gambia, as well as for her sense of humor and optimism.

He also commended Charge d’Affaires Stafford for his constructive and collaborative sense of work, openness and sincerity in his relationship with his colleagues.

“His Excellency Joseph D. Stafford has achieved a great deal in US-Gambia bilateral relations during his short time here in The Gambia,” Ambassador Soner said.

He added that the United States is Turkey’s ally and close friend for at least the past six decades, and pointed out that The Gambia has remained a friendly and brotherly country since its independence in 1965.

Ambassador Soner expressed hope that relations between the two countries would further improve and last forever.

Speaking on the occasion, Joseph D. Stafford thanked the Turkish ambassador for the gesture. He said there are a lot of prospects for improvement in their relations, as well as with The Gambia.

Nigerian Ambassador Esther John Audu, in her remarks, expressed hope to further continue the bilateral relations between her country and other nations like The Gambia, the US and Turkey for the benefit of their peoples.

She acknowledged having received a lot of support from her diplomatic colleagues. 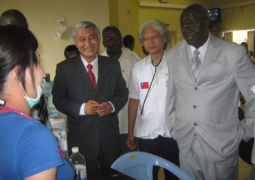