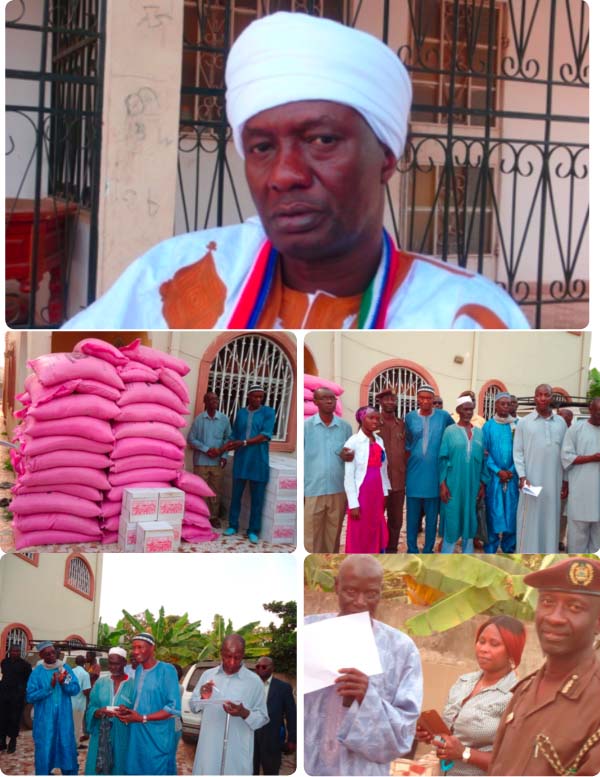 The presentation of the gifts coincided with the presentation of various cheques amounting to D547,410 to various government institutions, including the Gambia Immigration Department, students, GPF, the private sector and needy students, as well as NGOs.

The aim was to support them in their community-based development initiatives, and the presentation ceremony was held at his VDF sub-office in Churchill’s Town.

He noted that giving out such a magnificent amount to the needy students, security personnel, and the private sector was something worthy of commendation.

He also advised the students who are beneficiaries to utilize the money for its purpose, and continue coming out with excellent results in school.

According to Mr Jeng, the achievements of Mr Darboe cannot be mentioned all, as Darboe has done a lot for this country, including the rehabilitation of roads in the communities and supporting different religious groups, both Muslims and Christians.

They are witnessing yet another presentation of cheques amounting to D547,410 to various institutions and communities to support their development initiatives, he announced, and thanked Mr. Darboe for his wonderful achievements over the years.

Speaking on behalf of the Christian community in The Gambia, Reginald John expressed appreciation for the gifts provided by Vision Development Foundation under the coordination of Modou Turo Darboe.

It was a surprise to him to come and receive this mighty gesture on behalf of the Christianity community in The Gambia, Mr. John said.

The gifts would go long way in helping some families in this Christmas celebration, he said, and thanked Mr Darboe for the love that he has for both Gambians and non-Gambians.

This was a clear testimony that Mr. Darboe has no boundary and limit in helping the poor and the needy, he added.

Mr. John challenged everybody, particularly those that have the potential to emulate Mr. Darboe’s kind gesture.

He said The Gambia needs more Modou Turos, who treat everybody equally whether you are a Muslim or Christian.