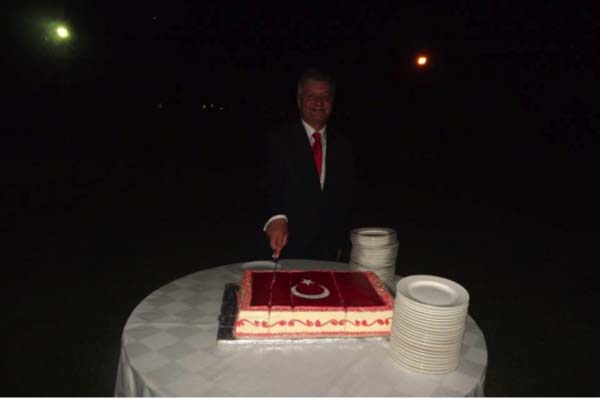 (Friday, 31 October 2014 Issue)
The Republic of Turkey on Wednesday celebrated its 91st Independence anniversary at a reception held at the Kairaba Beach Hotel in Kololi.

The 91-year commemoration of freedom and nationhood was witnessed by Turkish officials working at the embassy, Turkish citizens residing in The Gambia, members of the diplomatic corps, and officials from various departments and institutions in the country.

It stated: “I would like to congratulate on the Republic Day all our citizens living in this friendly country where you perform your duties.

“I pray to the Almighty that the 91st Anniversary of the foundation of the Republic of Turkey will be conducive to the benefaction of our country, our nation, and all friendly and brotherly countries.

The Republic of Turkey has a foreign policy understanding, which defends peace, solidarity, justice and prosperity in the world;respects internal affairs and territorial integrity of each and every country, and upholds human rights and freedoms above everything else.

“These values we have carefully preserved and safeguarded for 91 years will remain to be the unshakeable fundamental principles of Turkish foreign policy in the future, as is the case today.

“Turkey will never hesitate to support justice, righteousness and peace, and will continue to courageously defend the rights of the oppressed and victimized in every single issue.

“With its steadily growing economy, its democracy reaching higher standards, its resolute European Union strategy, and its membership to the G-20, and its active policies in international platforms, Turkey will never abstain from mobilizing its wide experience for the sake of regional and global peace and the benefit of humanity.”

Delivering his own speech on the occasion, Ambassador Ergin Soner said: “Today the Turkish nation is celebrating with great pride the 91st anniversary of the proclamation of the Republic of Turkey.”

He said the Republic of Turkey was founded on 29 October 1923 under the leadership of Mustafa Kemal Ataturk who was a nation-builder and a great reformer whose vision has become a source of inspiration not only for the Turkish people, but also for nations which were following in the footsteps of Turkey in their march toward independence and nation-building process.

He said the vision put forward by Ataturk has transformed Turkey into a modern and progressive country since the proclamation of the republic.

He added that today Turkey stands proud to be asecular democracy, an active member of the Euro-Atlantic community pursuing full membership in the European Union and a member of the G-20, a donor country, the 6th largest economy in Europe, supported by a dynamic private sector.

Ambassador Soner adduced that through its unique geo-strategic location, Turkey serves not only as a crucial geographic, economic, political and cultural bridge between continentsand peoples, but also acts as an important contributor to the regional and global peace and security in close cooperation and collaboration with its allies and partners.

He said Ataturk’s motto:“peace at home, peace in the world”has laid down the foundation of Turkish foreign policy.

The motto, he noted, is also reflected on the Turkish policy of partnership with Africa, which is based on reinforcing mutual gains and joint economic interests in bilateral relations.

He said Turkey’srelations with Africa constitute one of the prime orientations of Turkish foreign policy.

He said being an afro-Eurasian state, Turkey’s policy of opening up to Africa is not just the reflection of a transient political and economic expectation.

He said on the contrary, it is the product of a process with strong historical and cultural aspects.

He added that Turkey and The Gambia havefriendly and brotherly relations, based on a long and deep rooted past.

He said the mutual opening of the embassies in Banjul and Ankara recently, “has undoubtedly strengthenedourbilateralcooperation between Turkey and The Gambia.”

Within this framework, he said,2014 has also been a productive year in terms of bilateral relations between Turkey and The Gambia.

He said in February, President Jammeh paid a state visit to Turkey upon the invitation of the Turkish President.

He said on the margins of this state visit of President Jammeh, the two countries signed 5 agreements on 1) culture, education, science, press, youth and sports, 2) health and medical science 3) taxation, 4) defence industry and 5) security cooperation.

He said in terms of development cooperation, aid and assistance projects have been conducted by the Turkish cooperation and development agency and Red Crescent, as well as by several Turkish non-governmental organizations in The Gambia.

The Gambia has always supported Turkey on the international platforms.

He said Turkey has also been the staunch supporter of the Gambian interests in those forums.

He said Turkey shares and fully supports The Gambia’s visions 2016 and 2020 for development and self-sufficiency achievements.