Justice Minister Abubacarr Tambedou has announced that a Truth and Reconciliation Commission, with appropriate reparations for victims, would be set up within the next six months, and public hearings will be expected to commence by the end of the year.

Speaking yesterday at a press conference at his office in Banjul, the Justice minister said consultations are currently taking place to identify appropriate persons of high moral character and integrity, from a cross section of our social, cultural and religious communities, for appointment as commissioners to the commission.

He explained that a public information and awareness campaign shall also be launched soon, to start discussions on national television and private radio stations throughout the country, about the purpose and objective of a Truth and Reconciliation Commission.

Mr Tambedou also announced his ministry is in the process of finalising the draft terms of reference for the establishment of a commission of inquiry to look into the financial and business related activities of the former president, Yahya Jammeh.

“The commission is expected to start its work soonest,” he said, adding that the process is being done in consultation with President Adama Barrow and the cabinet.

Meanwhile, the Justice minister has said his ministry lacks the capacity and resources to prosecute criminal offences allegedly committed by the government of Yahya Jammeh.

As a result, until the ministry is ready in terms of capacity and resources “no new criminal cases involving crimes allegedly committed by the former government will be handled”.

“As at this moment, we are a long way from that state of trial-readiness,” the Justice minister told reporters.

“The working conditions of the Ministry must be improved first before we can engage in such highly complex and demanding exercises.”

The Justice minister said his ministry is on the verge of creating the post of Special Advisor to the Attorney General, whose principal responsibility will be to provide policy advice on the justice sector reforms envisaged by the ministry.

“The post will be funded by the British government and applications will soon be invited from suitably qualified Gambians to fill the post,” he said, adding that ministry is also exploring other ways of shoring up capacity through donor funding of local support initiatives.

According to Tambedou, the justice ministry is looking at the possibility of hiring members of the private bar on contract as a stop gap measure, while capacity within the ministry is being strengthened in key areas.

Meanwhile, the ministry of Justice has asked the police to conduct a more thorough investigation into the case of the NIA 9 - the nine senior officials of the National Intelligence Agency whose trial is ongoing.

“Criminal investigations must never be rushed. They require careful planning and strategizing, and will often involve specialised investigation techniques which may not be readily available in this country.”

Tambedou said if the investigations are not thoroughly done, there is risk of missing or losing crucial evidence which can lead to the collapse of an entire case at trial.

“This is why it is preferable that criminal investigations and evidence collection be guided by the Justice ministry right from the start.

“Anyone familiar with serious criminal prosecutions will understand and appreciate the challenge of proving beyond reasonable doubt every element of a crime charged, and the modes of liability alleged.”

According to Tambedou, the priority of the government, at this moment, is to rebuild the justice system and strengthen the capacity of the ministry of Justice in the process.

The ministry, he continued, must be in state of full preparedness to handle the demands of the criminal justice system in all respects.

The ministry of Justice was not consulted by the ministry of the Interior or the police, before any action was taken in the case of the NIA 9.  It was paramount that the Justice ministry was informed, in view of the fact that it was going to be ultimately responsible for the case when it is presented before the courts, Tambedou added. 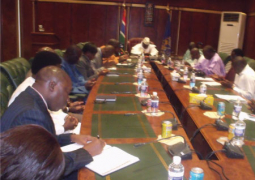 WAAPP distributes over 2000 bags of fertilizers to ‘Innovation Platform’ farmers

No hearing for ex-IGP & Co