As part of its corporate social responsibility, Trust Bank Gambia Limited, winner of the Gambia Chamber of Commerce Bank of the Year 2009, yesterday made a handsome donation of D250, 000 to the Rotary Club of Banjul.

The money, which was handed over to members of the club at a ceremony held at the bank’s boardroom, is geared towards the completion of a modern science laboratory under construction by the Rotary Club of Banjul.

In his remarks to welcome participants at the ceremony, Dodou Nyang, the Sales and Marketing Manager at Trust Bank, said the 21st century challenges require 21st century approaches towards tackling them.

According to him, the bank having realized this had contributed and continues to contribute towards this direction over the years.

“The like other countries around the continent continues to encourage more interest in the promotion of sciences,” he said, adding that Trust Bank is truly the unique bank of choice in the country.

“The bank has demonstrated that not only is health its priority, but also education and sports to ensure that the country achieves its Millennium Development Goals,” Nyang stated.

Oreme Joiner, General Manager Banking at Trust Bank Gambia Limited, underscored the significance his bank attaches in the promotion of science in the country.

“Education is an integral part of one’s development and relief from poverty. This is why we have collaborated with the United Nations Development Programme to promote the MDGs,” Joiner said, assuring all that the bank will continue to contribute tremendously towards educational development in the country.

According to the Trust Bank General Manager, the latest donation is part of the bank’s corporate social responsibility to give back to the society in which it operates.

“This is also seen as the bank’s contribution towards a legacy,” he said.

Mr Joiner underscored the tremendous achievements of the Rotary Club of Banjul over the years, noting that the bank will continue to play its quota in nation-building.

In receiving the cheque for the donation, Safiyoung Manneh, President of the Rotary Club of Banjul commended the bank for what he described as a timely gesture.

According to him, the donated sum of money is earmarked for the completion of a modern science laboratory undertaken by the Rotary Club of Banjul.

“With Trust bank, we are all assured of a bright future,” Manneh stated.

The marabouts and their victims 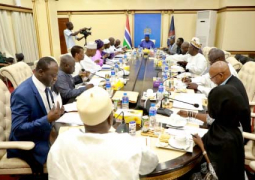