According to the Trust Bank Marketing Manager, the relationship started more than a year ago after a visit by the bank’s Managing Director, Pa Macoumba Njie, when he was taken on a conducted tour of the facility.

He was introduced to some of the patients and had consultations with the staff to get a firsthand account of some of the challenges faced by the institution.

It was the aftermath of this visit that triggered the chain of events that culminated with the donation of D250,000 worth of drugs, clothing, entertainment systems and the reinforcement of the security around the female wing.

A year down the line, Trust Bank again donated D250,000 worth of the appropriate drugs, clothing, electronic items and also erected security structures around the male wing to be able to contain patients who periodically attempt to abscond.

The handing over ceremony was presided over by Trust Bank’s General Manager, Oreme Joiner, who presented the items to the Minister of Health and Social Welfare, Dr Omar Sey.

In his remarks, Mr Joiner stated that the bank’s continued its commitment to making meaningful contributions in the areas of health, education, the environment and sports.

In the area of health, he added, this year alone, the bank spent close to D300,000 to reinforce the link road to the EFSTH Sanatorium after previously spending D2.7million jointly with the Social Security and Housing Finance Corporation for the construction of the link road in 2013.

He also informed the gathering of the finalisation of the process of making other significant contributions to at least four other health facilities around the country to the tune of over D550,000 before the end of 2015.

Mr Joiner thanked the Minister of Health for the progressively strengthening partnership between Trust Bank and his Ministry.

He also reserved special praise for the loyal customers of the bank, whose staunch support gives the bank the capacity to make such varied contributions to the causes geared towards the uplifting of our people.

Trust Bank Marketing Manager Dodou Nyang said that not only had Trust Bank persevered with its interventions in areas devoid of help from the private sector, but like at the EFSTH sanatorium, the aim is also to bring attention to a health facility that plays an integral part in the healthcare delivery system of The Gambia.

He again reiterated his often articulated belief that his bank continues to be “the force for good worthy of the only Gambian bank in our industry”.

In his keynote address, the Minister of Health and Social Welfare, Omar Sey, underscored the significance of not only the donation, but the fact that the facility is now part of a list of very important health facilities enjoying yearly donations from Trust bank Ltd.

He described the bank as the most important private sector partner his ministry has, noting that this donation would complement his ministry’s purposeful strides in ensuring an efficient and affordable healthcare service delivery to the citizenry.

He described Trust Bank as the kind of outstanding partner, and urged the vast majority of the private sector to emulate.

He extended his profound gratitude on behalf of his Ministry and the Government of the Gambia to the management and staff of Trust Bank Ltd.

The ceremony was attended by officials of both the Ministry of Health and Trust Bank Ltd, mental health stakeholders, members of the press and staff and supporters of Tanka Tanka Psychiatric Hospital, who were treated to a tour of the facility and an inspection of the items presented. 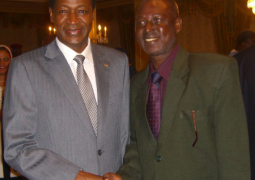