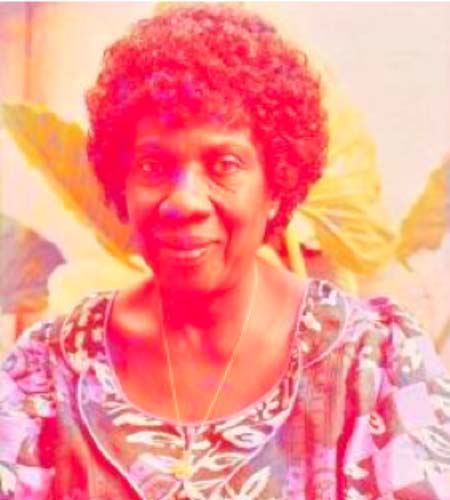 It is said that death is, ironically, one of the few certainties in life. So, even amidst the legitimate outpouring of grief, her family, former colleagues, friends and other associates might be expected to take the news of the passing on of Mrs Louise Antoinette N’Jie, more fondly known as Auntie Lou, with a touch of philosophy, especially given the health problems that of late beset her life. It is equally a truism that death does not, cannot, take away the good things done in life; these live on and get celebrated long after the doer is gone.

Mrs N’Jie, for her part, lived a rich life as mother, teacher, educationist, senior civil servant, political activist, state minister, community leader and an active member of her local church. It may not be possible for a single review to do justice to her legacy, to the varied facets to her life, as well as the good actions with which she is deservedly credited. In the present tribute, an attempt will be made to pause and reflect on her political career, covering her outstanding contributions to nation building in her roles, successively, as political activist, senior party official, Member of Parliament and minister.

In terms of partisan politics, Mrs N’Jie’s association with the People’s Progressive Party goes back to the very beginnings of the party. While it may be hazardous to claim that her political consciousness was aroused with the founding of the PPP, her trade mark passionate interest in politics only became publicly manifest within the context of the life and activities of the party which her brother-in-law helped to find, and led. Initially, as a civil servant she was subject to the obligation of restraint; as such, her contribution was in the nature, largely, of backroom and behind-the-scenes activism. But there was already no doubt about the strength and steadfastness of her commitment to the movement and the ideals it sought to foster. She demonstrated a true militant spirit, throwing herself with gusto into battles waged at the time for the triumph of the party. Much later, as if to inspire younger members, she relished every opportunity to recount the many fights and the hard work and sacrifices put in on the way to the success ultimately achieved.

Her retirement from the civil service in the 1970s freed her hands, allowing her to devote even more time and energy to party work. Her political career itself benefitted from a leap forward; she got nominated to parliament, as member, and within the party organization she was elevated to the membership of the policy-making Central Committee. A little later, she got appointed to the position of Parliamentary Secretary and assigned to support the Minister in the discharge of the responsibilities prescribed in his portfolio.

Each of these positions, i.e. MP, Parliamentary Secretary and membership of the party’s Central Committee, carried major responsibilities and challenges requiring of the holder strength of character, leadership qualities and a whole range of technical competences. But Mrs N’Jie did not arrive at the table with empty hands; drawing on her already extensive background, both as civil servant and politician, and demonstrating mettle as well as an uncanny capacity for hard work and commitment to achievement, she performed most creditably on each account. Her further elevation, in 1985, to the position of cabinet minister, making her the first woman to hold such a position, and her simultaneous cooption into the Party Secretariat, a coterie of senior party officials selected to afford support to the Party Leader in the day-to-day running of the party, came as no surprise.

The first ministerial portfolio she was assigned to grouped education with culture, youth affairs and sports. It was a vast ministry known to be beset with a number of historical challenges. Both the sector of youth and sports, notoriously hamstrung by chronic resource constraints and other management-related issues, and in the education department relations had not been smooth with the teachers’ union, perhaps the biggest professional association in the country and one that had the entire teaching force under its wings. Both sectors required sound judgment and delicate dancing around raw nerves. Mrs N’Jie’s time as minister might not have been marked by grand reforms and changes but she proved herself as an effective team leader and safe pair of hands. She was particularly successful in stepping up service delivery; she fought indefatigably to secure resources for her programmes and, in her characteristic no-nonsense style, keenly supervised their effective application.

She also gave creditable account of her leadership abilities, in so far as judgment as well as the capacity for taking tough decisions went. Perhaps the most notable test came when students at Armitage School protested over living conditions and threatened to disrupt the functioning of the school. With tension at the time bubbling below the surface at the teacher training Gambia College, Mrs N’Jie was not going to allow another theatre of conflict to open up to complicate matters. Moving swiftly, she effected drastic changes that saw the headship of the school change with the appointment of Musa Sanneh as Principal, a move vindicated by the extended period of stability and progress that followed at the institution.

She moved in 1987 to head the ministry of health, which also included social welfare and labour matters. For five years, until her retirement from Government and active politics in 1992, she successfully provided sector operations with the same style of hands-on leadership, characterized by a clear sense of direction, a healthy team approach to work and insistence on the very best in service delivery within resources made available.

Here too, whenever the situation called for it, she demonstrated decisiveness as was in the case of the cleansing services for Banjul and Kombo St Mary which for several years had been contracted out to the firm S S Ceesay & Sons. The public at the time was deeply dissatisfied with the quality of services being rendered. Yet, given the loose wording of the contract, with no clear specification of performance benchmarks, there persisted disagreement between the parties as to whether or not there was under-performance. Besides, the proprietor of the company, Saihou Ceesay, was perceived in some quarters at the time as being very close to the chief of state, which was in fact true in a sense. What was less true was the conclusion or assumption that some drew that the arrangement concluded with his company was untouchable. Mrs N’Jie, in any case, was no spineless minister and would not allow a situation that hang around her neck like an albatross to go on unchallenged. Shortly after inheriting the problem, she one late afternoon barged into my office, her mind firmly made up to either rescind the contract or allow it to lapse when the time for its scheduled renewal arrived in a matter of months. On that point, she did not need my views or advice; she only wondered whether I would advise her to first seek prior clearance from the President. As I saw no need for that, I merely reminded her that she only needed to put up a solid case showing that public interest demanded termination of the contract, and that suitable substitute arrangements had been thought through and would be in place to avoid disruption in such critical service. Within a month she secured Cabinet’s approval and shortly afterwards ended the encumbrance that the arrangement had become.

Call her “old school” or whatever; Mrs Louise N’Jie was a model servant of the state and the people. She loved The Gambia and was passionate about her progress. She was modest and saw the various leadership positions she held as a privilege and, above all, an opportunity to serve. And serve she did selflessly and with all her energy, but especially with a clear sense of her role to provide leadership in what she saw as team effort. She did not seek to project herself as the all knowing expert; rather she was a good listener to advice from her technical support staff. She was no demagogue, nor did she believe in mystification. She was sincere in all what she did; indeed Mrs N’Jie was always disarmingly direct, frank and unpretentious. Her focus remained on results; to that end, she consistently exercised firm control over her areas of responsibility, never hesitating to insist on changes in operational methods or to root out dead wood. But there was never any cruelty in her motives; instead she demonstrated natural sensitivity in handling human relations, leading often to the development of near mother-and-child relationship with her staff.

As a person, Mrs N’Jie always held strongly to her convictions. In the rough-and-tumble that, as with all parties, characterized intra-party relationships, she always maintained positions informed by her understanding of the party’s principles. Fiercely loyal to the party leadership, she however never sought to be a crony. That she deeply despised insincerity and sycophancy was best illustrated by her now memorable words pronounced at the tense meeting of the Party Secretariat in December 1991 convened to help the Party Leader arrive at a decision on the appeal made to him earlier that month at the fourth Ordinary Congress of the party held at Mansakonko. Facing down the pack of bully boys out, on the occasion, to drown out any dissenting view, she threw a challenge at their conscience with the rhetorical question whether it could be said that the right thing under the circumstances was to suggest that the Party Leader should renege on his announced intention to retire. In the deafening silence which followed her question, she slumped back into her seat, never to utter a word more on the vexed subject. The rest became history, and it will be up to historians to say which of the contrasting positions adopted on the occasion was in the best interest of the party and our country.

Meanwhile, as we mourn her passing on, we will do well to contemplate the example of selfless service and sincere leadership which Mrs N’Jie, and her type, left us; of late we have tried few other tricks in the book, including sham gestures of patriotism, with foolish posturing, calculated to throw dust into the eyes of the unsuspecting. But that is not how we will get to build a nation.