As a daughter I am writing this tribute with the words hesitantly appearing or should I say appearing between teardrops, hands shaking like a  leaf, and a feeling of numbness down my spine bringing back all that pain and horror of that Thursday night (16 December 2004).

These wordings are accustomed to be out every year, on this date

Oh how I hate December now

Oh how I hate going back home to The Gambia

Every time I go to The Gambia

Every time the plane is about to land, my mind takes me back to when I went to Pa’s funeral.

A funeral I never got to attend

All the same I hate this time of the year.

Death is painful in itself, twice harder if untimely and very excruciating when it was at the hands of some demons who feed on people’s souls like vampires.

What makes a killer so confident to live on?

Is it the taste of blood in your mouth? Or

Is it the gunpowder residue on your clothes?

You think you are ok…. Far from it!

That taste of blood will never be diluted no matter how much drink you have.

Those clothes you can wash with all the water from the Atlantic Ocean but that residue won’t be washed off.

Those eyes of an honourable man, whose only wrong was his commitment and dedication to a trade, would forever remain in your ignorant heads, and that vision will torment you to your graves.

The sleepless nights are nothing compared to what awaits you, your co-plotters and cohorts. You will kill each other like mongrels as that is what you are.

You try to hide under a blanket of lies, deceit and in an attempt to keep you going; you are showered with praises and given what’s not yours to spend.

Remember, you are on borrowed time and the curtain call is nearer than you think.

For when Justice comes knocking on your doors, no blanket on this earth would be wide enough to cover you and your cohorts.

No sewer canal is long enough for you to hide; you will crawl like rats into the gutter where you belong.

No amount of money would be enough to buy you the freedom you so need.

At least Deyda is at peace now with so many patriots with him; let’s see what you’ll leave behind when the time comes.

In the spirit of community service, he devoted all his life to the masses. He used his pride and joy (The Point Newspaper) to facilitate the flow of information freely and fairly. As he believed that was the ingredients needed for the development of any given system to promote good governance stability and the rule of law.

He was also a radical thinker and a social reformer who toiled for his homeland, defended and spoke for the oppressed and the voiceless. It’s a shame that the same dear land is where his blood flows in the hands of killers whose need to kill is as real as they need to breath.

Deyda was a household name; he had mentored so many and had been like a father to so many. Some of them are fighting tooth and nail to get him Justice and others have departed or denying any knowledge or association with him or his course. All for what, power, greed, money and freaking so called titles and for how long? You should hang your heads in shame as there are a lot more from where you came.

As for my loyal uncles, aunts, brothers and sisters (of the pen) who may be a few but “Allahamdulillah” are God-fearing, loyal and trustworthy, at home and in the Diaspora. We commend your enormous efforts and remain very proud of you, as I said to one of your colleagues over the weekend: you are Heroes and Fighters.

We thank you for keeping him live and also for tiresomely rallying behind us to get Justice for a man who stood and died for Freedom, Democracy and Justice. Rather ironic since he was killed just for that.

What happened to Pa is enough to make anyone depart from the trade, but no if anything a small sect among you remain steadfast to get Pa Justice; no matter what difficulties you face each and every day just to be heard.

That is enough to make us whole and anything else is gladly accepted as a bonus. We commend you for the way you soothe our pain is nothing words can say. Thank you for not giving up on our dearest Pa .We pray that your loyalty would be rewarded one day ‘Inshallah’.

Deyda was hated and killed for all he believed and stood for. Press freedom, Freedom of Expression, Democracy and Justice, which he wanted so much and which his ignorant coward killers couldn’t understand, or appreciate the need.

Seven years of hell with no answers, we are left in limbo with nothing that can lessen the amount of grief in our hearts.

The endless tears, feeling of loss and the longing to be with a special friend, to see those convincing eyes with assurance of love, safety and the promise to put his life on the line for his  family and what he believed in.

All these will remain part of our daily lives till we meet again. We are great believers and not mimics who imitate faith; we know Allah’s time is the best and ‘inshallah’ He will take us there.

Happy 20th Anniversary to The Point Newspaper. We congratulate the employees and the publishers for an exceptional anniversary. You are again commended just for keeping a legend alive.

As Deyda lives on in his pride and joy, you are slowly but surely getting there. You have faced so many obstacles, worked under extremely difficult atmosphere, along the way losing so many (by their own choice) yet gaining so much more.

We never thought that you will still be standing after the gruesome inhumane assassination of your founder. We thank The Almighty for seeing us through very painful and sombre times.

We also thank uncle Pap Saine, friends, all past and present staff, especially the loyal existing staff, who would do anything just to keep the paper afloat; that’s all we need. You struggle daily just to exist but just like your boss remained defiant to the last and decided not to go down without a fight.

You get beaten but proudly dust yourselves up and stay strong for another day; for this, we’ll forever be indebted to you. You show love, integrity, and faith daily. Long live The Point Newspaper!  ‘Cha kaw cha kanam’! 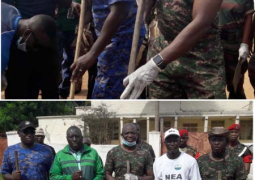 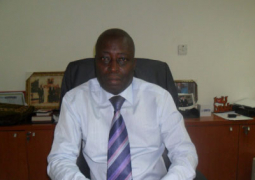