Testifying as the first prosecution witness, Cadet Superintendent Modou Sowe, a police officer attached to the Major Crime Unit at police headquarters in Banjul told the court that he recognized the accused person, who was Managing Director of the GPA.

“I happen to know the accused person in connection with the alleged petition letter he wrote to the Office of the President, when we received a directive to investigate him on the said petition letter,” he said.

He stated that immediately after the directive, a panel was instituted comprising three people and they were given copies of the said petition letter written by the accused person, who they later invited to their office, where he was cautioned in the presence of an independent witness.

The witness further told the court that during the course of the investigation, the accused person indicated in his cautionary statement that one Lamin Sanyang was about to knock him down with his car.

At this juncture, defence counsel LS Camara raised an objection to that statement. Camara argued that the particular document was not before the court and, therefore, it is not admissible.

Police prosecutor Sergeant Manga in reply told the court that the statement was admissible, under the Evidence Act

However, the trial magistrate agreed with the defence counsel, who stated that Section 19(B) is talking about hearsays, which the prosecution cited to back his submission. The magistrate noted that the witness cannot talk on a document which is not before the court.

Continuing his testimony, the prosecution witness told the court that he will be able to identify the petition letter, which he did.

When the prosecution applied to tender the letter in evidence, defence counsel Camara again raised an objection, stating that the document was photocopied.

He asked why the prosecution did not furnish the court with the original copy of the document, and asked whether it is in the hands of the relevant authorities.

The police prosecutor also argued on points of law, and the case was subsequently adjourned to 10th January 2013 for ruling.

The particulars of offence on count one read that Abdoulie Tambedou, on 13 August 2012 in Banjul within the jurisdiction of the court, wrote a petition letter with reference number GPA/MD (1) to the Office of the President, alleging that indiscipline is being meted out to him by the associates and relatives of his predecessor, Momodou Lamin Gibba, by way of making derogatory remarks towards him and the GPA management with intent to make the GPA ungovernable for him, and the information he knew to be false at the time.

Count two stated that Abdoulie Tambedou, on 13 August 2012 in Banjul within the jurisdiction of the court, wrote a letter with reference number GPA/MD (1) to the Office of the President that he had actually informed his predecessor, Momodou Lamin Gibba, of the problems he had with his alleged relatives and associates in which he distanced himself from their actions, an information he knew to be false at the time.

Count three stated that Abdoulie Tambedou, on 13 August 2012 in Banjul within the jurisdiction of the court, wrote a letter with reference number GPA/MD (1) to the Office of the President, that if he had taken action against Lamin Sanyang and Ebou Gibba, the duo would have definitely written to the President’s Office complaining of tribalism, an information he knew to be false at the time.

Count four stated that Abdoulie Tambedou, sometime in December 2012 at Police Headquarters in Banjul within the jurisdiction of the court, told the panel of investigators that Lamin L. Sanyang attempted to knock him down with his car during one of his visits to the PWD container terminal in July 2012, information he knew to be false. 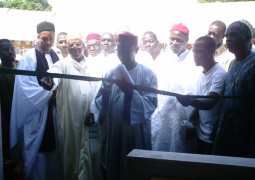