The Gambia quartetMamodou Danso, Sanna Nyassi, Abdoulie Mansally and Sainey Nyassi’s sides have made great impact in the weekly power rankings of goal.com when their clubs secured the top four positions in the nineteen-team United States Major League Soccer.

Gambian defender Danso and the Portland claims top spot in the latest edition of the rankings with a 3-0 victory over Colorado last weekend.

According to goal.com, one of the underrated parts of the Timbers’ resurgence, the competition upfront Caleb Porter, has cultivated two options to lead the line in Ryan Johnson and Frédéric Piquionne.

Both players worked hard for the team, but the goals desert them from time to time.

With both in the squad (although Piquionne could leave for the CONCACAF Gold Cup), Porter possesses the latitude to chop, change and procure the necessary production.

Sanna’s Montreal Impact came out second. The Canadian side was leading in the Eastern Conference.

Abdoulie Mansally’s Real Salt Lake are third after coming out top of the western conference. Sainey Nyassi’s   DC United are second from bottom. 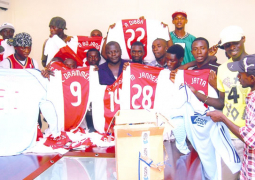