Christian marriage through the eye view of Rev. Bankole Coker 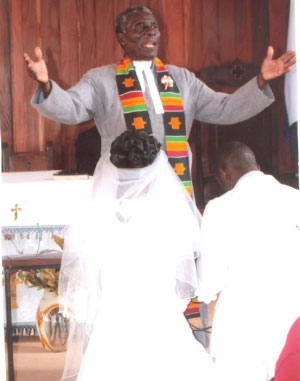 The month of June is commonly called the wedding month and so on 11th June Mr. Edward K. Ngegba and Miss Henrietta Saminatou Carew wedded in Trinity Methodist Church Serrekunda. The families of the two spouses gathered together to see their son and daughter pronounced and promised to each other a life long partnership in marriage.

They made this promise in the words, “for better for worse, in sickness and in health, till death do us part”. In fulfillment of this promise also they exchanged rings which represents the symbol of their love and faithfulness. The wedding ceremony was punctuated with readings of the sacred scripture from 1 Cor. 13:1-13 and Jn. 15:9-12. Rev. W. Bankole Coker a well experienced man of God both in ministry and married life gave the homily. He first of all preached on the meaning of Christian marriage. He said that marriage is one aspect of the life of human beings that God Almighty ordained. God from the time of Adam and Eve in the book of Genesis named that Adam become a husband to Eve and Eve, his wife. This is what God has left with humanity to this date. So as a man grows, he will come to terms with what God ordained in the life of Adam and Eve.

Rev. Coker also lamented the situation of some marriages in our day today. He said that from what he sees, there are many broken marriages. He bemoaned this phenomenon and reasoned that the break down in marriages, are caused because people enter into marriage for the wrong reasons. Some people marry because of what they can get out of it. They either want to be called “Mrs. X” because of marriage or they may be seeking some material values. These kind of people, the reverend gentleman said do not last in their marriages.

In further reflecting on this situation, he urged the couple before him to examine why they came to the Church. He said that the couple should have the right reason marrying each other. Though marriage is not easy but he urged them to live, bear and help each other in their married life. He emphasized that the couple should be able to have faith and marry with whatever resources they have. They should not look out and try to copy the life style of others who are well off.

Rev. Coker continued in his unique style of speaking in Krio language giving the couple the relevant advise of seeking the solution to their problems among themselves first.  He said that the couple should also seek the help of their mothers-in-law since they could be the best persons that their children listen to.  The mothers-in-law can be the suitable advisers in the circumstance of marriage.

To conclude his homily, the reverend gentleman congratulated the new couple for having the courage to come and marry in Church. He said that in the present times, it is disheartening to know that so many young people do not want to marry in Church.

The young men especially love to keep young ladies in love and friendship but do not come to marry them in Church. So the marriage of Edward and Henrietta should be an example which the young people of the Church should follow. He said that young people should be courageous and make up their minds to come to marry in Church. Lastly he affirmed the teaching of the Church that Christian marriage is for life and so there is no divorce in the Church.

The wedding which was well sung by a youthful choir was well attended by relatives friends and family members of the couple. After service the new couple Mr. & Mrs. Edward K. Ngegba received the blessings of the officiating ministers in the names of Rev. Bankole Coker, Rev. Gabriel Leonard Allen and Rev. Father Edu Gomez, of the Catholic Church.