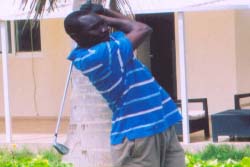 Tijan Kuyateh was named the winner in the Professional Golfers Category of Ronaldo?s Farewell Golf Trophy sponsored by Ronaldo Del Greco, who is leaving the Gambia after working here for more than eight years.

Mr Del Greco, who has been a very valuable part of Fajara Club and the tourist industry, was the head chief at the Sun Beach Hotel in Cape Point.

Tijan Kuyateh emerged the winner of the Professional Golfers Category with a gross score of 68.

In the men category of the Amateur Golfer, Graham Birse came out the winner with 39 points while Paul Maroun took second position with 36 points.

Julie Woods emerged the winner in the ladies? category of the Amateur Golfers.

Speaking to Ronaldo Del Greco shortly after the presentation of prizes and trophies to the various winners at the Fajara Club, he said the tournament was organised as a farewell initiative, as he was leaving the country for another challenge in another country.

He said it is a tradition at the Fajara Club that when one is leaving the country that individual organises a tournament for friends.

Mr Del Greco also said The Gambia is a great country with great people and that he had been left with great memories during his eight-year stay in the country, adding that he hoped to come back to The Gambia.

He also said he hoped the Gambia Golf Association and the Fajara Club could develop golf to higher heights in The Gambia "by working together". 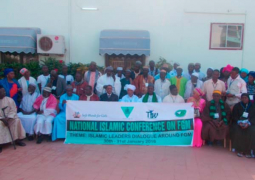