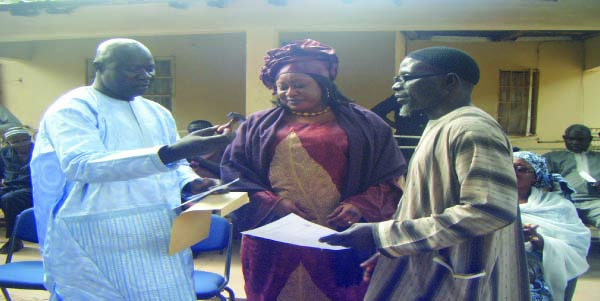 One Tijan Jarju was yesterday crowned the new alkalo of Ebo Town at a ceremony held at the grounds of the Kanifing Municipal Council.

The Lord Mayor of the Kanifing Municipality, Yankuba Colley, presided over yesterday's ceremony.

The new alkalo is 47 years old, and he is a son to the former alkalo of Ebo Town, Pa Landing Jarju.

In handing over the alkalo stamp and the documents to the newly-selected alkalo, Mr Tijan Jarju, Mayor Colley said the former alkalo of Ebo Town, the late Pa Landing Jarju, passed away last year and since then he (the mayor) was the one acting as alkalo.

He noted that he summoned a meeting of the council of elders of Ebo Town to discuss, and for them to select one person to replace the late alkalo.

After a series of consultations with the elders of the village, they finally agreed to select Tijan Jarju as the successor of his father.

The newly-selected alkalo, Tijan Jarju, confirmed his acceptance of the new post, adding that he would do his best to ensure that he lives up to expectations.

He added that he is a son to the late alkalo, and has been supporting him in all areas.

The new alkalo commended the people of Ebo Town for the trust and confident bestowed in him.

He called on them to collectively work together to bring development to their community.