A theft case involving one Buba Jaiteh was mentioned on 22 September 2015, before Magistrate Mbye of the Kanifing Magistrates’ Court.

But the accused, Buba Jaiteh, did not accept responsibility.

He was granted bail of D20,000 with a Gambian surety who should swear to an affidavit of means and to surrender his or her ID card to the court’s registrar.

Who pays the price? 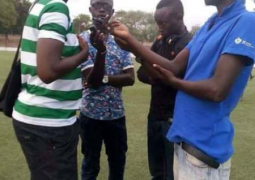