Theatre preview: ‘Chains of Inspiration’ by Janet Badjan-Young: a dance drama based on the Atlantic Slave Trade

The Ebunjan Theatre Troupe under the able direction of veteran playwright and theatre personality Janet Badjan-Young is busy producing another major dance drama titled ‘Chains of Inspiration’ based on the sad story and legacy of the Slave Trade across the Atlantic, which ran from the 1400s to 1807.

With funding from UNESCO, who are interested in the promotion of the slave trade memory, Janet Badjan-Young seeks to re-interpret this heinous chapter in African history by focusing on the tenacity of Africans in the face of the onslaught of the pernicious trade. ‘The Chains of Inspiration’ is a testimony to the strength and endurance of our people to survive, return to their roots and contribute to the advancement of the continent.

UNESCO needs commendation for their dedication to eternalising the memory of this great crime against humanity, the slave trade.

Much of the literature on the Atlantic Slave Trade has focused on the pains, despair and suffering of African slaves: their capture, terrible experience on the Middle Passage, life of drudgery on the sugar plantation and torture. A good example is the famous Roots by Alex Haley.

What is refreshing in Janet’s new production is that she highlights these basic takes on slavery, but goes a step further to underscore the triumphs that Africans were able to gain amidst the wickedness of the trade: the ability of slaves to regain their freedom, return home to Africa to better the lives of their people.

She traces the fall and rise of Ayub Bin Suleiman, a prince who was captured from River Gambia area and sold into slavery, but who managed to regain his freedom to return home and assist in the courts of his father; Phyllis Wheatley, the Wollof Gambian poetess, who sold into slavery at a tender age, managed to get some education and became a noted poet, respected even by George Washington, the American founding father; Sengbe Pieh, of Sierra Leone origins, who bravely led a revolt of slaves aboard a ship and managed to have the pitiable cargo of humans set free after a lengthy trials in which another great American, John Adams, defended the rebel slaves.

Another novelty in the play is its focus on love and passion among the slaves. The terrible lot of the slaves was sometimes cushioned by their falling in love with each other.

The play is enriched by a historically factual text which has got the major dates, personalities and places right.

Janet must have done a lot of archival and field research on the evil commerce which has led to a script that gives a historicity to the subject. For students of history, especially, this play is a must see; it shall give a good insight into the dark crannies of the slave trade across the Atlantic which their history books do not always tell. The play is animated by traditional Gambian griot music and dance to give the play a setting and  tempo.

While Aunty Janet is still doing the finishing touches to this ambitious play, for showing before the onset of the rains, we dare say that when it comes on stage, it promises to be one of the best pieces of drama to be staged in this country in the past five decades. Take my word.

The play will premiere in June 2011 at the new Ebunjan theatre at the Kanifing Institutional Layout. 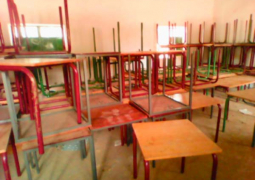