The staff of the Ministry of Tourism and Culture recently bade farewell to their colleague Fatoumatta Mamburay-Njie, Head of Records Office, who has retired after 40 years of active service.

Hon. Fatou Mass Jobe-Njie, Minister of Tourism and Culture, described Mrs Njie as a hardworking, sober and helpful staff who was always forthcoming in ideas on how to improve the ministry’s records services and staff output in general.

She thanked her for the support she has given her since she assumed the ministerial portfolio.

He described her as a steadfast and sincere colleague who was always ready to share ideas with the administration of the National Records Service on how to improve their delivery.

He tasked Mrs Njie to continue to offer her advice and support to his department.

Colleagues of Mrs Njie spoke on the same lines, thanking her for her long service to the country.

In reply, Mrs Njie appealed to her colleague to always set straight anything they see that is faulty, saying that patience and dedication to work is also important in taking someone forward.

Mrs Mamburay-Njie entered the Civil Service in 1971 at first the Ministry for Local Government as a Secretary and later moved to other Ministries before she rose to the rank of a Senior Records Officer.

Noah Touray, permanent secretary at the Ministry of Toursism and Culture, chaired the meeting.

In attendance were family members of Mrs Njie, staff of the ministry and allied departments and of the National Records Service. 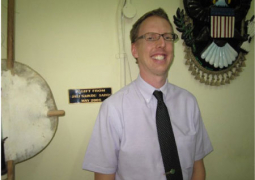