Previous Prophets mentioned some of the characteristics of the Prophet of Islam in their heavenly books, giving their followers the glad tidings of his future appearance. As the Quran says: “Those to whom We sent books (the Jews and the Christians) know well of Muhammad (s.a.w) and his truthfulness, just as they know their own children, but some of them obstinately hide the truth, although they are well aware of it.” (2:145). In the troubled world of those days, cultural and moral decline, together with polytheism and idolatry and all their ramifications had submerged the whole globe. Even the heavenly religious that had followers in different parts of the world had undergone radical change in the course of time; not only had they lost all vitality and ability to guide mankind, but their most creative elements had fallen prey to decline. There was no hope of infusing a new spirit of life in them, of making blood course once again through their hardened arteries. The People of the Book were therefore waiting for some profound eruption and the emergence of a new heavenly personality who would bear on his capable shoulders the heavy burden of guiding mankind, leading them away from decaying systems of thought to a new and progressive teaching.

The world had reached the end of its tether in the midst of all that confusion and unrest. It longed for a whole new environment, different from the poisoned one in which it lived, and waited for a hand to emerge from the sleeve of the unseen which would destroy the crumbling structure of the old order and build a new one on its ruins. Each of the peoples and nations that were then dominating the world had in some way fallen prey to anarchy and confusion. The Arabs who lived at the crossroads of the great powers of that age and whose broad homeland was traversed by the caravans of international commerce felt more powerfully each day their weakness and impotence vis-a-vis their powerful neighbors. The danger of complete extinction that faced the Arabs because of their lack of an organized political structure and because of the power of their oppressive neighbors was plain to any farsighted person. It was under these circumstances that the promised deliverer Muhammad, upon whom be peace, was born at dawn on Friday, the seventeenth day of the month Rabi’ al-Awwal, fifty three years before the migration (hijra), corresponding to the year 570 of the Christian era, in the city of Meccain the Arabian Peninsula. It was a land of stifling repression, the very symbol of a sick and decadent society where ignorance was actively cultivated. It was like a swamp where the waters of corruption stagnated, a pit in which humanity had been buried.

It was in such a place that the Prophet first set eyes on the world and the light of his splendor first shone on the horizons of human life; it was there that this quintessence of being who was destined to bring human thought to maturity generated a new energy and an inexhaustible vitality in mankind. None could reach his level of excellence in the qualities he possessed, and all expectations were fulfilled with his coming. He appeared at a time that society was prepared for him because it needed him. Not only the Arabian Peninsula but the world at large was prepared for his coming, because the whole of the ancient world was longing with all of its being for the appearance of a man who would take it by the hand and guide it to its goal. The sphere of the heavens, in its prolonged and ceaseless rotation had never been able to bring forth a creature like him whose substance was pure and free of all defect, who was completely untainted by all imperfection. History bears witness that this blessed infant, whose splendor shone forth from the arms of his mother Aminah, over the whole world came to establish the most creative of all faiths and the purest, most profound and pervasive of impetus, for the cultivation of knowledge and spirituality.

By prohibiting flattery and subservience before the thrones of the emperors and the powerful, he awakened to new life the dormant minds of human beings and created a suitable environment for their cultivation. He drove away idols from the threshold of their veneration, instructing them instead in the mysteries of Divine unity and teaching them how to live and die with dignity. As a result of his teachings, idolatry gave way to monotheism and the worship of the one true God; ignorance yielded to knowledge and science, brotherliness, compassion and other human virtues took the place of hostility, hatred and discord; and those who had been reared in an atmosphere of corruption and ignorance became the choicest specimens of humanity. Abdullah, the father of the Prophet, was a descendent of Ishmael. His was a truly human heart, a heart that overflowed with love, fidelity and mercy. After marrying Aminah, he went trading in Syria, accompanying a caravan that was leaving Mecca. Aminah was already pregnant and impatiently awaited the return of her husband. But a severe illness laid hold of Abdullah, drawing the life out of him so that he died far away from his homeland.

He closed his eyes on the world and its pleasures, full of painful regret that he would be unable to see Aminah again or the child that she was to bear him. After a time, the young mother learned that in the sixteenth year of her life she had been widowed and left alone with a small infant. Her father-in-law, Abd al-Mutallib, took her and the infant to his own house, and then decided to send his newborn grandson to the Banu Sa’d in the desert, to be suckled by them and to grow up in the pure air of the desert. Four months had passed after the birth of the Most Noble Prophet when the wetnurses of the Banu Sa’d came to Mecca and one of them, a woman of pure disposition called Halimah, declared herself ready to suckle the orphaned Muhammad. Halimah returned to the desert with the child to take care of him there and he stayed among the Banu Said continuing to grow until he was weaned. Still, however, his grandfather continued to leave him in the care of the tribe until he was five years old, and throughout this period the kindly wet-nurse took good care of him and paid attention to his upbringing. He learned the best and most authentic dialect of Arabic, and imbibed the most eloquent forms of Arabic speech. Halimah took him to see his mother two or three times, and on the last of these occasions she turned him over to his mother. When a year had passed, Aminah left Mecca, taking him with her to show him to the wet-nurses who live in the villages between Mecca and Yathrib. Full of joyous satisfaction, she reached the dwelling places of the wet-nurses, but she was not destined to return to Mecca.

Aminah died in the course of her return journey and was buried where she died. Her infant orphaned son, now six years of age, was left alone at the side of her grave. He had never seen his father nor had he fully enjoy the kindness and affection of his mother for just as he was about to begin benefiting from her upbringing, fate snatched her away and left him alone in the awesome expanse of the desert. At the time of the death of his mother, the infant Prophet had reached the age when intellectual and spiritual characteristics begin to develop. His grandfather, Abd al-Mutallib, for whom he was the only reminder of his own son, Abdullah, and a source of consolation for his weary heart, then assumed responsibility for his care and fulfilled this trust worthily until his death. <<<<<<<<<<<<< To be continued 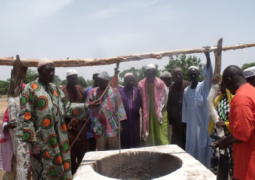