It is important for each of us to know that our identity is in Christ and no longer in Adam. When God created Adam he made him in his own image, to be precise ‘in our own image’ – meaning the image of the triune God – God the Father, God the Son and God the Holy Spirit. Everything else was created after their own kind except human beings. “And God said, ‘Let the land produce living creatures according to their kinds: livestock, creatures that move along the ground, and wild animals, each according to its kind.’ ” (Genesis 1:24)

Unfortunately, our great, great, great ancestors Adam and Eve did not realise who they were. When therefore Adam conceded his God-given authority to Satan through disobedience, they lost their status along with the privileges. The Spirit of God departed from them. They became ordinary human beings without any authority. You will recall that Adam’s authority extended to naming all animals. “…and whatever the man called each living creature, that was its name,” (Genesis 2:19)

With his change in status, Adam begot his first son. The Bible account states; “When Adam had lived 130 years, he had a son in his own likeness, in his own image and he named him Seth.” (Genesis 5:3) Adam produced someone like him – sinful, disobedient and powerless. Therefore we have inherited Adam’s nature. We are born sinners and that’s that. The good news is that we do not have to stay that way, we have a choice to do away with the label that Adam has put on us.

God had a plan to redeem humanity by restoring him to its initial position. To do so he had to choose someone who had not committed sin like Adam. He had to recreate a second Adam. “He became flesh and he dwelt among us.” (John 1:14) Note in particular the words ‘he became flesh.’ He (Jesus, God’s Son) left his heavenly throne to take up the form of a human being - so that human beings could be bought back, redeemed. Adam’s mess had to be cleaned up and only Jesus who had never committed sin was able to accomplish this.

Whilst initially Adam was automatically spirit-filled - he did not have a say in the matter; today, it has to be our desire to be spirit-filled, what Jesus called being ‘born again’ – being spirit-filled of our own free will. As soon as we opt for such a status, we become recreated human beings. We will no longer be made in the image of our ancestors like it was with Seth, but in the image of Jesus Christ – the One who laid his life for his friends. We are spirit beings able to perceive the things of the spirit, apt to comprehend the Word of God which is spirit and life. (John 6:63)

Ever knew you are an ambassador? Being a child of God and living on mother earth confers on us the status of an ambassador. Just as an ambassador is the representative of his head of state in a foreign land, we also are representatives of Jesus Christ on earth. “We are therefore Christ’s ambassadors, as though God were making his appeal through us.” (2 Corinthians 5:20) An ambassador may be living in a foreign country but with the full powers of the president of his country. His residence and his office are like his home territory in the host country. No one can violate its territorial integrity except he allows it. He enjoys all the privileges his head of state would have enjoyed if he was there in person. He is a plenipotentiary – meaning he has full powers.

Our status is not in anyway different. We are the ambassadors of Jesus Christ on this planet with the full powers to act in his stead. We are representatives of the kingdom of God on earth. The world can do nothing to us except we let it because our position is inviolable in Christ. This is awesome.

We are in this world but we are not of this world. We are just passing through. We cannot make this planet our final destination. “If you belonged to the world, it would love you as its own. As it is you do not belong to the world, but I have chosen you out of the world.” (John 15:19) We cannot then live as if this is our final destination. We are transiting, passing through. We cannot afford to live the way the world lives if we know to whom we belong.

Adam’s authority has been restored to us through the finished work of our Lord and Saviour Jesus Christ. On the cross he declared ‘It is finished.’ This is the reason he announced to his disciples: “All authority in heaven and on earth has been given to me. Therefore go and make disciples of all nations, baptising them in the name of the Father and of the Son and of the Holy Spirit and teaching them to obey everything I have commanded you.” (Matthew)

How’s that for your new you? Start operating in it today. 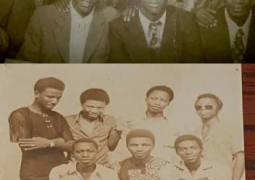