The  presidential election in the (also known as Congo-Brazzaville) offers an opportunity to show that African politicians have learnt to allow national interests to take precedence over narrow and petty partisan ones. Elections in Africa are almost always followed by disputes, then protests and then armed conflicts that could last for years on end accompanied by displacement and untold loss of lives and destruction of property. " is not the crude caricature of a continent at war. But for far too many Africans, conflict is a part of life, as constant as the sun," Mr Barack Obama said recently in during a one-day visit.

Reportedly, many people have fled the Congolese capital because they feared that the election could result in mayhem. But the 's leader allayed the fear of his supporters whom he told to go and vote as there would no longer be wars in the country. In politics, there is usually a disparity between rhetoric and action. Politicians, particularly the African breed, are notorious for breaking their electoral promises with impunity.

It is even more worrisome because the has a turbulent history of political instability. Since winning political independence from on August 15 1960, the has been plagued by coups and counter coups.  The country's first president Fulbert Youlou was ousted in a three-day uprising organized by labour elements and political rivals. After a brief junta Alphonse Massamba-Debat was installed as the head of state. His government was brought to an abrupt end in August 1968. Captain Marien Ngouabi then assumed the presidency on 31 December 1968. On 16 March 1977, President Ngouabi was assassinated. In the interim, an 11-member Military Committee of the Party (CMP) took the reins of power under the guidance of (later Gen) Joachim Yhombi-Opango. Barely two years later, Yhombi-Opango bowed out for Denis Sassou Nguesso. For the nearly two years, the Congolese fought a civil war until a peace deal was struck between the warring factions in December 1999.

In the 2002 highly controversial presidential elections, Sassou won almost 90% of the votes cast. This led to renewed fighting in the pool region between the government forces and rebels led by Pastor Ntumi. In April 2003, a peace treaty to end the conflict was signed.

It is therefore understandable why Congolese are apprehensive of trouble in the days ahead. The challenge is on the ruling class to prove to the entire world that it is capable of organizing credible elections that can stand international, regional and national scrutiny. This is what is needed in order to avoid another possible imminent catastrophe on the continent.


"So Two cheers for Democracy: one because it admits variety and two because it permits criticism.

Two cheers are quite enough: there is no occasion to give three. Only Love the deseves that". 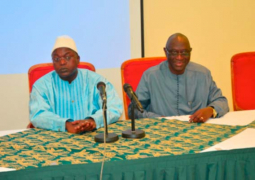