The Economist magazine sometime ago dismissed as "the hopeless continent". Long before then, had been pejoratively described as "the dark continent". Both descriptions conjure in our minds a continent that is foredoomed; where nothing works. And where poverty, disease, destitution, lawlessness are accepted as a way of life.

For most Africans, the continent is in the abject condition it is now because of colonialism. They argue rabidly that if colonialism had not happened, would have been much more prosperous than it is today. But such people forget that most African countries still have relics of colonialism in the statute books which they rely on to hound fellow Africans they perceive as their enemies. If our present leaders are still relying on vestiges of colonial laws to harass their fellow Africans, how are they different from the colonial masters they gleefully denounce at every opportunity? Although colonialism was dehumanizing, Africans have to learn to put it behind them and forge ahead on their own terms.

As we see it, can make it provided it has a purposeful leadership. President Barack Obama said sometime ago in , , that the trouble with is poor leadership. His Secretary of State Hillary Clinton has reaffirmed that weak leadership and corruption deter American investors from coming to to do business. Without investment, no continent can prosper.

The challenge facing the present generation of African leaders is how much they spout anti-colonialism tirade, but it is how well they manage the continent's resources for the benefit of the African people. If resources are equitably distributed and well harnessed, our youth who risk their lives daily in the open treacherous sea and desert will be able to live out their ambitions on the continent. If 's superabundant resources are well utilized for the good of the African people, there will be prosperity and progress on the continent so much so that people from other continents will be scrambling for our visas.

It is therefore up to African leaders to restore the dignity of the African people by respecting the rule of law, promoting economic and social justice, espousing transparency and magnanimity in governance, and ensuring that basic civil and political rights of the people are respected at all levels.


"So two cheers for Democracy: one because it admits variety and two because it permits criticisms. Two cheers are quite enough: there is no occasion to give three. Only Love the deserves that." 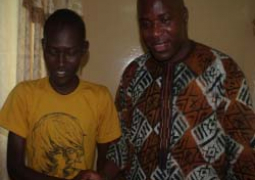