The Point newspaper can reliably confirm that there was ‘no Gambian or Senegalese national’ involved, when several restaurants and shops in London were raided by UK border agency personnel for allegedly hiring illegal workers.

Concerns were raised by Senegambians that their countrymen may have been arrested or detained during the raid, as a few of the restaurants affected had employed Gambians and Senegalese over the years.

One of the restaurants (name withheld for privacy reasons) is so popular with Senegambians that it always entertains guests with popular Senegalese music. Thus some of the concerns raised were justifiable.

The enquiries prompted this correspondent to conduct an investigation; however, the good news is that there is no Gambian or Senegalese involved.

It would be recalled that the searches took place a few weeks ago, when about ten restaurants in London, some of them around Shopping Centre, got raided. Shoppers were stunned to see officers storm not only the “Centre”, but some well-known restaurants in the area.

Consequently, more than 20 immigrants suspected to be ‘working illegally or to have overstayed their visas, were ‘arrested or questioned’. These restaurants are well-known for their great offers and specialities in both local and traditional food, and they have been operating in the UK for many years.

However, with the new immigration rules and regulations, both employers and employees are required to respect and adhere to certain rules or be arrested, prosecuted and fined.

The Home Office has acknowledged that the raids and arrests took place, and that ‘officers carried out several operations in London and elsewhere … and found people who are in the UK illegally … we will seek to remove them’.

An immigration expert in the City told this correspondent that the ‘issue of illegal migrant workers and their employers is not only controversial, but also very difficult to verify’ and those involved in the project are finding it hard to ‘determine the real conclusion’.

A very good sample is the fact that an Immigration Minister and Member of Parliament, Mark Harper, who was very instrumental in the project, called ‘Here Illegally? Go Home or Risk Arrest’, in a dramatic turnaround found himself in what was described as a ‘highly embarrassing situation’.

It was discovered that the minister ‘unknowingly employed an illegal migrant’. Soon after the revelations, he gracefully resigned from his position, which was accepted by Prime Minister David Cameron with ‘regret’.

Meanwhile, the project was has been ridiculed by the press, politicians, lawyers and human rights groups in UK. It was so unpopular in London, and ended in the courts and was subsequently banned. 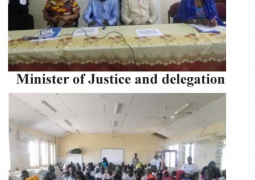