Mention has frequently been made in our sports columns about the paramount importance of stakeholders in the sector of sports. That premise could not have been better demonstrated than in Gambia's recent bid in the World Cup and Nations Cup qualifiers.

The entire Gambian nation was of one accord in declaring the Gambia's performance as historic. That was clearly shown both by the official records as well as in the field of play. But what has been responsible for such a brilliant output, one may ask. Firstly, it had to do with a band of players found by all opponents to possess a will of steel, impactful skills, and high sense of mission. As a team they have been found a hard nut to crack, as team unity, cohesion and performance were always maintained at high levels.

High motivation and youthfulness crowned it all. The Scorpions were indeed a team to watch on the day. Even Senegalese supporters enjoyed watching them play despite the dread and apprehension. They have to score! Then there was the technical crew headed by a very able coach in the person of Paul Put. His skills as a master planner and motivator were not in doubt. Closely following the team's progress have been the public and private media. Relentless coverages including interviews and situational reports kindled national interest and indeed galvanized fan support across the country. Speaking of supporters, they have not been found wanting as we could see from their unprecedented support from the first kick-off against Liberia to the final whistle in Dakar. The Department of State for Youth and Sports and the GFA Executive stood up to their responsibilities and executed them well. Last but certainly not least, has been the overwhelming support of Chief Patron, His Excellency President Jammeh. Can there be a more dedicated and generous personal supporter of Gambian football? And then there was AFRICELL.

What a power house of support they have been!!

We cannot thank them enough.

Everything said and done, we say congratulations again to the Scorpions. And what we are emphasizing here again is that Sports is an affair of all stakeholders. So let us keep up the momentum. Our only regret in this historic performance is the extensive destruction in Dakar after the match and the sacking of the national coach. But that's historic too. 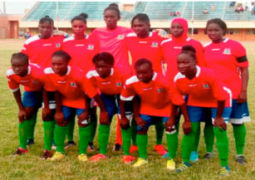