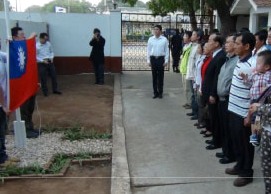 The embassy of the Republic of China (Taiwan) in Banjul organises a flag-raising ceremony in the first dawn of the year 2012, which is also the centennial anniversary (1912-2012) in celebration of the establishment of the first Republic among Asian countries one century ago.

A press release issued by the embassy said: “Around 40 attendees from Taiwanese abroad, including a two-year-old boy, enjoyed the singing of the national anthem of the ROC (Taiwan) and then the national flag song as the country’s flag was raised to the top of the pole above the ROC Embassy in Banjul.”

Impressed by the energy shown by the Taiwanese people, many said this was a “fresh and encouraged” experience that Taiwanese abroad flocked together in a far-away African country to sing the national anthem and watch the raising flag with many people. It was really a touching moment, it added.
Addressing the ceremony, the Taiwanese Ambassador to The Gambia Samuel Chen stressed that the centennial anniversary is very historical and also very positive.

He used 3 P-initial words to conclude his New Year wishes. The first one was “peace” and the second is “prosperity”, both mean the whole world could pursue the developments under peaceful environments, as Taiwan and Gambia’s performances are both good examples for the past years. The third p is “promotion,” he wishes that the Gambia is further progressive in the New Year and hopes that through the diligent work and close cooperation, Taiwan-Gambia brotherly relationship could be promoted from strength to strength. 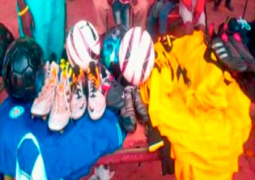