Time for a paradigm shift: from seeking office to capacity building

My fellow democratic aspirants, I will not waste space here to say any more about myself than the fact that I am a fellow concerned Gambian with a special message for you. I will begin with a disclaimer that this discussion is exclusive to the opposition movement and that the complete absence of any criticism of the Gambian government is intentional for a reason. Even so, I sincerely urge you to read on anyway, not for my sake but for the sake of our common heritage and destiny. I also understand that this is quite an unusual perspective regarding the role of the “Opposition” in African politics, but as Dr. Martin Luther King Jr. had dreamt about 50 years ago, so should we all dare to dream for what is right and what defines our true character as human beings. I believe President Obama calls it “The Audacity of Hope.”

Growing up in The Gambia, I have listened to so many of you speak so eloquently about good governance, democracy and development for the . I want to thank you for your efforts in trying to forge a better way forward for our beloved country. However, for the past 11 years that I have lived aboard, your contributions to the current state of divisiveness of our people over political affiliation, has left me very sad for the future of the .

Please understand that I have no doubts that you are all well-meaning citizens who want to do the best for our country. My issue is with the methods you have been using. Instead of the name “the opposition” that you fondly answer to, what Gambians will truly benefit from is for you to critically re-examine your own positions by asking the following hard questions:

2.         Can you gain credibility with the Gambian people by resounding so loud about everything wrong with the current government, while completely failing to acknowledge and support what it is doing right?

3.         Why should we care more about replacing President Jammeh than making sure that the choices to replace him will be better leaders?

4.         For the past 17 years, how did you help build the capacity of the Gambian government to provide for the wellbeing of our people?

5.         Is there any credible evidence to support the idea that nations that change their government often have a more functional society?

While these questions are not intended to take anything away from your genuine contributions to ’s political process thus far, they are a deliberate attempt to challenge you to clarify your true convictions for the future of the country and the role you intend to play in it.

You see, does not have the luxury to watch its leaders engage in perpetual political in-fighting at the expense of what the nation’s limited resources can buy, as we see happening all over the world. I therefore urge you to make the quest for a peaceful and prosperous your individual and collective priority, ahead of seeking the office of president. Show the nation that you are leaders and not merely seekers of political office – believe me, there is a difference, and we can tell.

The best measure of a person’s ability to lead, irrespective of the arena, lies in his or her ability to forge authentic partnerships with important stakeholders to influence the right course of action. Yet, history has long proven that a person does not have to hold political office to exemplify true leadership. Ask Mahatma Gandhi or Dr. Martin Luther King Jr. if you do not believe me. These icons have both led their respective peoples through greater challenges and emerged much more revered as leaders than most of us would ever dream of in a thousand years. Gandhi did not have to become the president of India to lead his people to independence from mighty Britain, nor did Dr. King have to be a member of the U.S. Congress or claim the White House to become the key instrument for the passage of, perhaps, the single most important piece of legislation in U.S. history – the Civil Rights Law. You might not be able to do what Gandhi or Dr. King did, but you too can live a legacy of greatness, if only you can want it more for the nation than yourselves.

Here is the plan:

I urge you all to consider whether becoming the president of the Gambia yourselves is more important to you than making sure that any president of the Gambia is as successful as they can possibly be in governing our homeland. Show the nation that your dreams are not just for you, but also, and primarily, for what is in the best interest of the entire nation. I am not asking you to join the APRC. In fact, I am advocating for the very opposite. What I am urging is a shift from the “rights approach,” where everyone is driven by what rights they have to be in the lead, to a “responsibility approach,” where everyone is focused on searching their own souls for how they can make a meaningful difference for the common good. However, you must first start by attempting to repair the absence of mutual trust, confidence, and respect that perpetuate the relationship between yourselves and the government. Do not worry, I am not going to ask who is responsible for the current state of affairs. Frankly, Gambian people are not interested in the blame game. What we seek is a better future - a more peaceful and prosperous for all of our children. This is where we need leadership.

I currently live in a country that is widely considered the world’s greatest existing democracy, yet there is a lot about even the government and politics that I do not want for the . This is not to say that there is anything inherently wrong with the US system, but the fact that it is based on ideals that are, in so many ways, unique to the values and beliefs of the American people. I understand that there are many in who, looking from the outside, would want African Governments to mimic the democratic ideals of Western societies. However, most of these would be utterly tragic for without a careful look at what is uniquely different about our people, our culture, and our Geo-political and economic realities. Please note that I am not implying that our people are any less worthy of the promise of representative democracy and self-determinism. What I mean is that we need to be more careful about the contextual application of these constructs. Besides, it is not elections, or term limits that determines the existence of a democratic society. Rather, it is the existence of a genuine balance of power, an empowered people, and a united advocacy for the “common good” that creates the right environment and motivation for citizens to freely participate in democratic processes and nation building. These are not the responsibility of governments only, and their exercise is not contingent upon holding political office. Rather, it is a duty upon every citizen, especially those asking to be entrusted with public office.

Today, what Gambia needs is a strong alternative force to the central government that can positively influence it to willingly promote justice, fairness, participation and equal opportunity for all citizens.  If we have enough smart people, as I believe we do, then we do not need to force, manipulate, or seek to undermine our own nation’s capacity to improve the condition of our people. We can do this more constructively by engaging one another. Instead of being an opposition to the government, please consider the alternative of serving as its most trusted ally in all matters of governance and development. In his all-time international best-seller “How to Win Friends and Influence People,” Dale Carnegie highlighted three fundamental principles for handling people:

a. “don’t criticize, condemn or complain” b. “give honest and sincere appreciation,” and c. “arouse in the other person an eager want” to do what is right.

I believe this should form the core of the new movement I am urging you to lead.

I hope you would agree that this is indeed a better approach than being an “opposition.” If you do, please consider including the following elements:

1.         It should be created and operated independently from government influence

2.         It must have trust and confidence building with the government and civil society as its signature theme

3.         It should be intentional in its motivation to acknowledge and affirm every positive effort put forward by the government.

4.         It should completely avoid and discourage all actions aimed at blaming, shaming or undermining the will of the government to be as effective as it can be for the Gambian people

5.         It should make concerted effort to engage Gambian citizens abroad in ways that the government is either unwilling or unable to do to support the country’s development agenda

6.         It should engage private sector and NGO partners both at home and abroad to create value added projects and programs that provide alternative employment opportunities for citizens

7.         Its members should seek and serve in government, but not without an unwavering commitment to  independence, neutrality and accountability

8.         It should include as part of its foremost objectives, the creation of the best political, and social infrastructure that encourages a threat-free civil engagement at the national political level, inspires hope in the citizenry to participate, and ensures balance in the creation of public policy

9.         If conceived and operated effectively, this council should prove to be an invaluable partner for the government as well as an instrument of balance of power in national affairs

It is my sincere belief that a genuine and intentional change in approach by the nation’s current “opposition” movement will be very helpful in building trust and confidence with the government. Improvement of trust between the two constituents will help lessen the government’s perception of threat to its position, which will in turn help promote peace and security in the country. In addition, because ’s most vital resource is its people, any action to increase constructive participation in governance will be immensely beneficial to the nation’s capacity building efforts. There are things that our international partners can do for us, but capacity building is not one of them. Capacity is what we will have left should they all decide to leave today. Therefore, building capacity is our sole responsibility, and it requires all of us working together, not opposing one another. Do not be ’s “opposition” parties, be ’s “supporting” parties. Therein lays your ultimate success. The choice is yours. 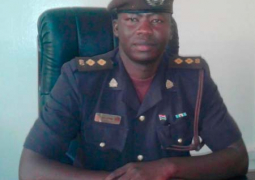