The Gambia wins seat on UNESCO Executive Board

The became a member of the Executive Board of UNESCO when it won elections on 2 November 2011.

A press release issued by the Gambia National Commission for UNESCO said out of the 186 member states entitled to vote, only three ballot papers were declared null and void. The gained fifty-six per cent of the total votes cast for member states coming from the sub-group representing Africa South of the . Twelve countries in vied for eight seats on the Board.

The last won a seat on the Executive Board in 1989. Membership of the Board is for four years, the release added.

The Executive Board oversees the overall management of UNESCO. It also prepares the work of the General Conference, which is composed of the 195 member states and sees that its decisions are executed. The General Conference assigns specific tasks to the Board during its biennial meetings. It elects the fifty-eight members of the Board. The Executive Board meets twice a year.

The ’s membership of this important organ of UNESCO affords it the opportunity to participate in the decision- making process, easily access information about activities and benefits from major programmes. It will also increase the visibility of the country.

During the current General Conference being held in , The Gambia also won seats on the International Programme for the Development of Communication, IPDC, and the Headquarters Committee of UNESCO.

The IPDC is responsible for all communication and information projects funded by UNESCO. It has recently financed the establishment of a community radio station in Bansang in the Central River Region. The Headquarters Committee oversees the management of the infrastructure of UNESCO.

The Gambian delegation to this year’s UNESCO General Conference was led by Hon. Fatou Lamin Faye, Minister of Basic and Secondary Education and Chairperson of the Gambia National Commission for UNESCO.

Other members of the delegation included the Ministers of Culture and Tourism, Higher Education, Science and Technology, senior staff of the Gambia National Commission for UNESCO, Ministries of Basic & Secondary Education, Higher Education, Communication, the Permanent Delegation to UNESCO and the National Centre for Arts and Culture. 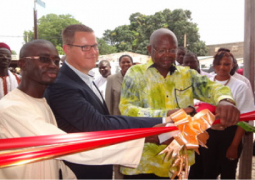