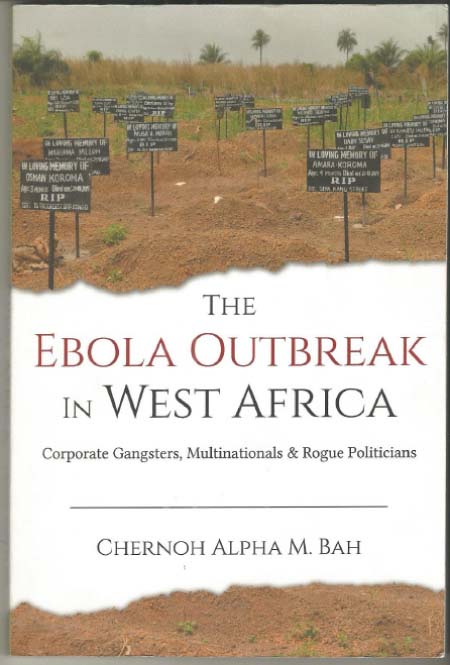 An African’s view point on an African tragedy

Among the many calamities which have befallen our continent since the 1960s, none has been as devastating and as mediatised as the recently ended? Ebola outbreak which hit the Mano River countries of S/Leone, Liberia and Guinea Conakry hardest. The Congo Crises of 1960, the Biafara war of the late 1960s and the Ethiopian Famine of 1984 all put together pale into insignificance when compared to the sheer enormity of pain, death and grief which the Ebola epidemic occasioned. Over 11,000 people perished.The redoubtable S/Leone journalist Chernoh A.M Bah has this time came to the rescue of African intellectual dignity by not waiting for outsiders such as Westerners to chronicle the causes, course and consequences of the epidemic for us the victims. Here is a book which gives an Afro centric view of this sad chapter in African history. For too long, Western writers of whatever hue have been given the license to be the first to have a take on issues which first and foremost affected Africans. Now here is a book which has changed all that.

In this enthralling and highly engaged treatise, Bah starts by giving a detailed context under which the Ebola epidemic broke out in late 2013 in West Africa. In chapters 1, 2 3 he demolishes theWestern media narrative of the ‘zoonistic’ origins of the disease; that is, it started from West African wildlife (page 15) and asserts that it was a ‘criminalization of African culture’(page 26) syndrome again at work. In chapter 2 the author asserts the historical basis of European use of Africa as one vast laboratory for experiments on medicine since the days of slavery when slaves were used as guinea pigs to test new vaccines: apartheid South Africa, did it against its Black population, (page 40) so did the German colonizers against the Herero in Namibia (page 36-37). The sum total of such scary experiences says the author is that ‘ordinary people from across the region questioned the actual origins of the Ebola virus and its modes of transmission’.

In chapter 4, 5, 6, the authors details how foreigners raked in profits from the misery of the Ebola epidemic. Here again, the author gives tangible examples of how people under the guise of humanitarian workers made fat salaries and allowances and lived in posh USD270 a night hotels in Freetown, for example,in the name of helping S/Leone fight Ebola. This is another sad aspect of not only the Ebola epidemic but also all the other humanitarian crises in Africa: they afford rogues to become prophets; swindlers to become heroes and drifters to become aid workers.

In the final three chapters, the author narrows his lenses down to S/Leone and explores how the Ebola outbreak brought the best and the ugly: it led to engaged citizens like the author himself working to provide much needed supplies to the overwhelmed and ill protected medical workers, while others in the corridor of power busied themselves in political infighting while Ebola was in full swing. This ugly distraction, maintains the author led to catastrophic consequences. Heroes like the late virologist Shiekh Umar Khan, who died fighting Ebola are discussed with the panache they deserve by the author.

I salute the author for his exhilarating work. He writes passionately about the suffering which had visited his people, and how much of it was due to negligence and or foreign manipulation. His tone is socialistic, which make the narrative sometimes sounds a bit anachronistic. But this is generally a great work, which should be required reading for all who are engaged in the anti neo-colonial struggle. Now I am assured that scholars far and wide will first have to quote Bah when they start writing about the Ebola calamity of West Africa two years ago!