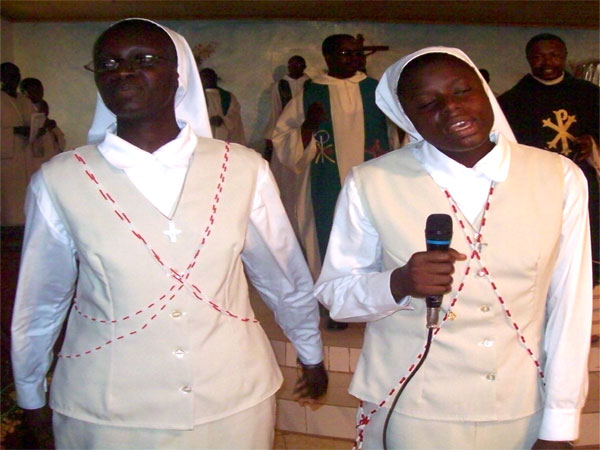 The Gambian community is blessed with good and religious people who have made an indelible mark on the society as a whole. These include the Sisters of the Presentation of Mary Sisters. These Sisters like other religious Sisters live an austere life style for the . They live the example of the Gospel despite their human frailties. They take three vows to enable them live a consecrated life style to suit Jesus' commands. The vow of Poverty enables the Religious in the Catholic Church, to live a simple lifestyle, leaving a poor and modest lifestyle. The other is the vow of Obedience; this enables these Sisters live in total submission to the Lord by obeying their superiors and authorities that are placed to represent God. The vow of Chastity also rated as equal to the other two allows the religious person to love as Jesus loves. This detaches the Sister or Religious from getting marry and bearing children. This in an African contest is unimaginable but with God it is possible. Their love at this stage becomes general and not concentrated on any one human being but God and the love of His Church. Augustine Kanjia goes round to search during the first vows of Sisters Bibian Sambou and Rosine Sanyang who took their vows at the Holy Family Catholic Church recently to see what it means to the society which they serve.

Sisters Bibian Sambou and Rosine Sanyang two young Gambians, have been in training for four years and finally took their vows of poverty, chastity and obedience. These Evangelical Counsels set the religious apart for God's task through the love of mankind. The sacrifice enables the religious to see the difference between the good the bad and the ugly. The two young Presentation Sisters got their call from the same point and children should watch this if they should follow suit and Sisters too should copy and propound on what attracted the two young ladies to choose religious life.

Sister Bibian Flora Sambou, daughter of David Kebba Sambou and Veronic Sally Demba, was born on 7th February 1985 at Abuko and was baptised on the 17th February 1985 at Saint Therese's Parish. She was confirmed on June 2001 at the Resurrection Parish at Brikama. She has three brothers and five sisters. She is from an extended family.

She attended , St. Edward's Upper Basic at Bwiam and the 's respectively. When at a tender age, the young Bibian at her nursery school, was inspired by her headmistress who was a Marist Sister. She was attracted by the Sister's mode of dressing, her simplicity and her love for children and the many gifts she gave to her. Her motivation was crowned by the weekend visits she made to Sisters' Convent as a child. She had the opportunity to be in a hostel for girls run by the SSND Sisters when at Bwiam, lasting for three years.

After all the nurturing within her she was finally caught by the Presentation of Mary Sisters (PM), when the Sisters gave talk on their foundress and their congregation. This was a further inspiration for young Bibian urging her to join the juniorate in Rivier Home while still studying. Upon completing Grade 12 she opted to continue her formation proper according to the charism of the Presentation of Mary Sisters. During her formation, Bibian had community and apostolic experience in various communities. As a pre-postulant, she went to Affiniam in Cassamance, then to Serrekunda as a postulant and Brikama as a novice. These experience are part of those that made her know the Sisters more and to live the charism of Mother Rivier in a more fruitful way.

Sister Rosine Sanyang, a daughter of Alexander Sanyang and Bertha Manga Sanyang, was born on the 8th of February 1985 at Bakau New Town. She was baptised on 6th May 1990 at St. Charles Lwanga Parish, Fajikunda and got confirmed on 8th June 2001. She is from an extended family.

She attended and left for Brikama and Banjulinding for her Upper Basic and proceeded to where she completed her Grade 12. Rosine comes from a devoted Catholic family, which is the turning point for her taking up the religious life. The desire was burning in her since she was young and she did not hesitate to make it known. She got some of her inspirations from Sisters' dress code and through the kindness of one Marist Sister who simply supplied her with sweet and biscuit but it became apparent that she was not called to that family of Sisters.

Rosine completed Grade 12 and opted to start the formation proper by learning the Sisters' way of life. She was sent to various communities during formation for mission experience. As a Pre-postulant she served in Serrekunda, and in Brikama as a postulant and in as a novice. These experiences have empowered Rosine to make Jesus Christ known and loved especially the little ones.

During the profession at the Holy Family Catholic Church in Bakau, the Vicar General, Rev. Fr. David Jimoh Jarju, said it was a moment of service and they should have faith in God. Thirty-six months of formation should enable them to perform tasks. He said the two Sisters should note that they would have no children. "Let your life be an open book so that you would not give what you do not have. Walk with love," he said. The vows of poverty, chastity and obedience mean giving yourselves, it is no struggle to God and He would want you to live clean and to be like that every day. He further said that first profession requires faith because it is shaping ones future. He compared Religious vows to that of marriage and the priesthood. "These are public figures, if any of them do anything others do, there would be an outcry," he said. He urged the Sisters to maintain high standard to influence the life of people. He further advised them not to be afraid to train their younger sisters, "Move on and go beyond showing love to your parents. Maintain standards and name more successes than failures in your new life for the .

In the Gambia the Presentation of Mary Sisters run a large vocational school in Banjul, a Noviciate and a Retreat and Conference Centre in Fajara, a Basic Cycle School in Brikama, and a Catechetical Centre in Serrekunda. 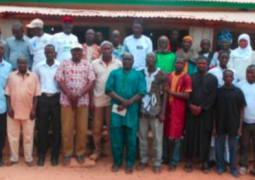 Final Matches in League One to Take Place This Weekend