The Gambia National Trade Union Congress has added its voice to the copious number of institutions and individuals condemning the 30th December 2014 attack at the State House.

It states that the constitution of The Gambia gives every Gambian citizen the right to form a party, to elect and be elected, hence all should repose confidence in the ballot box as a means of changing a government and not by violence.

This is the right ballgame in this democratic space of ours, since anything short of true democracy poses a danger to society and good governance.

Democratic values should be upheld at all times, and one instrument to reach that end is through election or the ballot box, which is the surest arbiter of disputes among free men. So let’s go for the ballot box instead of the gun and bullet.

We should eschew violence, for when it seems a route for some of us to achieve our goals; it wreaks more havoc on us individually and as a nation.

As Gambia National Trade Union Congress puts it, The Gambia is a small developing country with extended family systems that treasure peace and tranquility.

“Therefore, we should avoid violence because it does not only end with those who excite it. It affects others, particularly children and women, who have nothing to do with it.”

Violence affects not only the direct victims, but also other individuals who share the same environment with the victims. And in the case of a violent coup or conflict it affects the whole nation, causing physical and infrastructural harm, and huge socio-economic setback to the progress of the country.

Learning from the mistakes of others provides invaluable opportunity for us not to go down a similar lane.

The GNTUC has reverberated a cautionary statement in our hearts and minds that “we should learn lessons from other countries which have suffered the consequences of violence.”

Hence we should apply the right method to assume state power, rather than do it by force of arms or other violent means.

“A man’s country is not a certain area of land, of mountains, rivers, and woods, but it is a principle; and patriotism is loyalty to that principle” 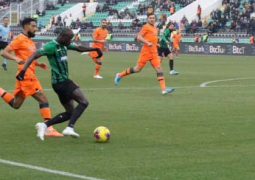