In response to the general consensus among the opposition and election monitors of the need for electoral reform in the Gambia to promote free, fair and credible elections, six opposition parties held a series of meetings to take stock of all the constitutional, legal, procedural and administrative challenges confronting the electoral system and have on11th May 2015 formulated a comprehensive set of demands and proposals for electoral reform,aimed at ensuring the creation of a level political architecture for holding free ,fair and genuine elections and have forwarded them to the President of the Republic of The Gambia, The Chair person IEC, The Speaker of the National Assembly, The Chief Justice, The Attorney General and Minister of Justice, The Secretary General ,United Nations; The Chairman, African Union ; The High Representative For Foreign Affairs , EU; The Chairman , ECOWAS; The Secretary of state, United States and Reverend Jesse Jackson.

The following is a summary of the proposals and demands for electoral and constitutional reform to enhance participatory democracy and undiluted choice in public elections.

Therefore the Opposition demands among other things the recognition and observance of the right of all Gambians to be registered as voters and to vote, irrespective of whether they are resident at home or abroad.

The opposition noted that section 50 of the Constitution makes provision “for the establishment of a Constituency Boundaries Commission” since 2001 which has been honoured with disregard. The absence of such a commission had led to gross imbalance in respect to the size of constituencies thus negating the ideal situation of having constituencies with equal population or equal number of voters, which alone could give effect to the principle of equal number of persons determining equal number of representatives.

It strongly recommends that, in the event of any constituency boundaries delineation exercise, the demarcation proposed by The Commission under the Chairmanship of Arch Bishop Tilewa Johnson be given due consideration.

The opposition observed that the removal from office of three Chairpersons of the Independent Electoral Commission and other members by the executive prior to even serving one seven-year term and the failure to publish the appointments in the Gazette so that the courts could take judicial notice of them, have undermined the Independence of the Commission and the security of tenure of its members and has also facilitated an overstay of membership beyond the limit established by the Constitution.

The opposition demands that all appointments of commission members be gazetted as required by law for all subsidiary legislations and those who have served more than two seven year terms should vacate their seats and no member of the Commission be removed for any reason without the setting up of a tribunal comprising three judges of superior courts to determine any allegation of misconduct or infirmity.

It is further proposed that the membership of the Commission be increased to seven excluding the Chairperson so that there is a Commissioner responsible for each of the seven Administrative Areas.

In order to instill confidence in all stakeholders and guarantee the absolute independence of the Commission, a constitutional amendment is proposed to make it mandatory to draw members of the Commission from TANGO,The Gambia Bar Association, The Gambia Press Union, the Gambia Christian Council, The Supreme Islamic Council, The Gambia Teacher’s Union, The National Youth Council as long as they function as non partisan civil society segments. Appointments should be sensitive to the principle of gender equity.

4. PROTECTION OF THE ABSOLUTE MAJORITY PRINCIPLE AND UNDILUTED CHOICE

The opposition observed that section 48 of the Constitution which was amended was approved at a referendum in 1996 to ensure that a President is elected by the absolute majority to guarantee undiluted choice.

The relevant portion of the amended provision stated that

“(3) No person shall be elected as President on a first ballot unless the votes cast in his or her favour at the election are more than fifty per cent of the total number of votes validly cast at that election.

. The opposition proposes the re-enactment of this constitutional provision before the 2016 Presidential Elections.

It is statutorily established and mandatory for every Gambian citizen being 18 years or older to possess a national Identity card. We demand that the National ID serves as the principal document to be produced or an affidavit indicating its loss, defacing or destruction, to determine age and citizenship for registration as a voter.We demand that all those who are registered using an affidavit to appear before a revising court to show their new ID cards or have their names struck out.

The opposition proposes that, like the voter’s card, the ID card should be made universally accessible, at public expense for all Gambians 18 years or older. Cost should be involved only if replacement is needed.

It is further proposed for the Elections Act to make provision for each registration team to be monitored by two registration agents appointed by each registered political party and maintained by a fund set up for that purpose and administered by the IEC.

6. NON INTERFERENCE OF PUBLIC SERVANTS AND THE DISCIPLINED FORCE IN PARTISAN MATTERS

The opposition observes that Section 41 of the Constitution provides “equal access to public facilities and the media by candidates at public elections.”

(a) Allow his or her political inclinations to interfere with the discharge of his or her official duties;

b) be a member of, or take part in any association of persons which might prevent him or her from impartially discharging his or her duties; or

The opposition further observes that the Memorandum of understanding between parties makes it obligatory for all parties to “respect the full separation of powers as detailed in the constitution.

II. Not seek in any way to unduly influence or use other arms of government for political purposes;

.The opposition, therefore demands that all parties refrain from using public servants, members of the disciplined force, traditional rulers, public facilities and public funds for campaign purposes; that the post of head of the civil service be divorced from cabinet post; that no circular be issued to public servants by departmental heads requesting them to participate in any matter which has partisan objectives.

7. PROTECTION OF SECRECY OF THE BALLOT

The opposition took note of the provision of Section 40 of the constitution which states that, “All public elections and all referenda voting shall be by secret ballot.”

The opposition has given reasons why the voting method where Polling agents are required by law to sit where they would not be able to know how a voter voted but would know that only one ballot has been cast by listening to the sound resulting from the impact of ballot tokens on the internal baffle plate or device in each ballot box which should emit the same sound to avoid detection, has become anachronistic and proposes ballot papers to replace the marbles.

8. PROTECTION FROM THE ABUSE OF INCUMBENCY

The opposition highlighted that Section 208 of the Constitution calls on: “All state owned newspapers, journals, radio and television shall afford fair opportunities and facilities in the presentation of divergent views and dissenting opinion."

The opposition proposes the adoption of a campaign period of three months duration to enable the voters to be well informed and create a level ground before elections.

9. PROTECTION AGAINST OSTRACISM OR STIGMA OR DISCRIMINATION

Relying on Section 26 of the Constitution which states that, “Every citizen of The Gambia of full age and capacity shall have the right, without unreasonable restrictions-

(a) to take part in the conduct of public affairs,directly or through freely chosen representatives;

(b) to vote and. stand for elections at genuine periodic elections for public office, which election shall be by universal and equal suffrage and be held by secret ballot;”

. It recommends for the amendment of section 63 of the constitution so that an upper age limit would not constitute a bar to participation as a presidential candidate.

It is also recommended that a Gambian stationed abroad to work, study or for any other purpose be considered to be ordinarily resident in the Gambia.

10. The Opposition endorsed the IEC’s recommendation to the National Assembly for electoral law review to exclude Attestation Forms from the documents that are to be forwarded to the Registration Officers during registration of voters” to determine citizenship and the request to re-introduce the screening of registration applicants by registering officers.

The opposition further supports the proposal to mandate the IEC to demarcate boundaries before the setting up of a boundaries Commission and hold Presidential and National Assembly Elections on the same day using paper ballot as the system of voting.

11. TWO TERM LIMITATION ON TENURE FOR THE PRESIDENCY

The opposition recommended the promulgation of a two term limit of four or five year duration per term to enhance greater political stability and national peace and security.

11. VACANCY IN THE OFFICE OF PRESIDENT

Running Mate or Election Within 90 days

The Opposition observes that Section 65 of the Constitution provides for the assumption of the office of President by the Vice President whenever the office of president becomes vacant and by the speaker if there is no Vice president. To ensure that no person becomes president who is not elected by the people we recommend the adoption of the practice of having a running mate in contesting presidential elections. In the event that a vacancy occurs after the running mate assumes office we recommend that an election to the office of President be held within 90 days after the office of president becomes vacant, if the remaining term is more than two years. In any other case the Speaker of the National Assembly would assume the office for the rest of the term.

12. THE REVITALISATION OF THE INTERPARTY COMMITTEE

The opposition proposes for the revitalisation of the Inter party Committee to enable it to serve as a forum for dialogue and cooperation to promote participatory democracy anchoring on the level ground required for the holding of free, fair and genuine elections.

The opposition further proposes that the Inter party Committee be given a statutory mandate to enable it to foster dialogue on broader Constitutional, Legal, Institutional and Administrative reforms touching on the mandate and operations of the Executive, National Assembly, The Judiciary, Regional Administration, the National Council for Civic Education and the IEC in order to promote good governance, participatory democracy and genuine elections. 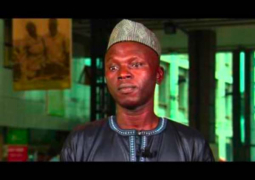 Memoirs of a traveler